Range & Migration Map: Purple Martins, the largest swallow in North America, are Neotropical migrants; they migrate north in the spring to breed in Mexico, the United States, and Canada. In late summer, after their young have left the nest, they migrate south to their nonbreeding range in South America. Martins are secondary cavity nesters; this means they nest in a cavity, but do not excavate the cavity themselves. Instead, they use old woodpecker cavities, or natural cavities in dead trees, cliff faces, etc. In the eastern half of North America, Purple Martins have undergone what's known as a tradition shift. Gradually, they have switched from using natural cavities to artificial housing humans supply for them. Native Americans started this tradition shift hundreds or even thousands of years ago, by putting up dried, hollowed-out gourds for the martins. Today, in the eastern half of North America, martins are completely dependent on supplied housing for breeding. They now nest only in gourds and multi-compartment wood and metal housing. 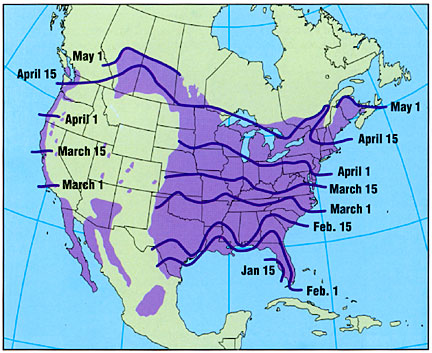 In the mountainous areas of western North America, martins have not undergone this tradition shift and still nest as all martins did originally, in natural tree cavities and old woodpecker cavities. This means that putting up an eastern-style martin house in western mountainous areas likely would not attract breeding martins, but no one has seriously tried with modern attraction techniques. In the Pacific Northwest, where martins once nested almost exclusively in cavities in pilings along rivers and on the coast, they now nest almost entirely in human-supplied housing in these same habitats due to widespread nestbox programs. Here they will nest in clusters of gourds and groupings of single-unit wooden boxes. In Washington, Oregon, and the southern tip of British Columbia, people who live on or near the water can help martins by putting up such housing.

In the remainder of western North America (with the exception of Alberta and Saskatchewan, where martins do use gourds and multi-room houses), martins have not accepted any type of nestboxes or gourds. In California, where martins nest in cavities in trees, lava tubes, and road bridges, it may be possible to attract them to gourds and single-unit boxes. Martins in Arizona, New Mexico, and Mexico nest only in cavities in trees and cacti.

The martin's breeding range is shown on the map in gray. Horizontal lines mark average arrival dates of older martins at established colony sites. Yearling martins, the age-group that typically colonize new breeding sites, don’t begin arriving until 4-6 weeks after these dates, and continue arriving for an additional 4-6 weeks in the north, 10-12 weeks in the south. This means martins can be attracted to new housing through mid-June in the northwest. New hobbyists should not open housing until 4-6 weeks after the dates shown here. Opening earlier at new sites will result in the attraction of nonnative, nest-site competitors (House Sparrows and European Starlings), instead of martins. If you live in an area where Purple Martins use artificial housing, and are going to put up gourds or wooden boxes, follow the timing schedule above for opening boxes.

Gourd Homes for Other Birds

Even if you do not live within the breeding range of Purple Martins, or if the Purple Martins in your area do not use gourds or nest boxes, there are many other kinds of birds that will nest in wooden houses and gourds. Some of the birds you might attract are: Mountain Bluebirds, Western Bluebirds, Tree Swallows, and Violet-green Swallows, plus several species of chickadees, wrens, woodpeckers, flycatchers, titmice, owls, kestrels, and nuthatches. For more information on housing for these species, you can check with a local wild bird store, your local Audubon Society chapter, or consult the local library. The Complete Birdhouse Book, by Donald and Lillian Stokes, or A Guide to Bird Homes, by Scott Shalaway, are two good sources of information.

Each bird has its own habitat requirements, entrance hole size, and cavity dimensions. For wrens, entrance holes should be about 1", and the gourd about 5" or 6" in diameter. Their preferred habitat is near the edge of a brushy area, in the shade. Chickadees (1&1/4" entrance) like their nests in wooded areas, while bluebirds, Tree and Violet-green Swallows (1&1/2" entrance) like their housing out in wide open areas. Flycatchers need an entrance hole 1&3/4" to 2", hung in a tree or near brushy areas.

Gourd bird houses should be equipped with 4 to 6 drain holes, and 2 hanging holes. The entrance hole should be drilled so that it faces straight out; it should not tilt up, or the gourd will admit too much rain, and it should not tilt down, so that young won't fall out. If the habitat of the bird you want to attract is open, and the gourd will be in the sun, paint it white or a very light beige or tan, to help reflect the sun's heat. Otherwise, it can be painted a natural color or simply varnished to protect it from the weather. Use plastic-coated wire to suspend gourds.