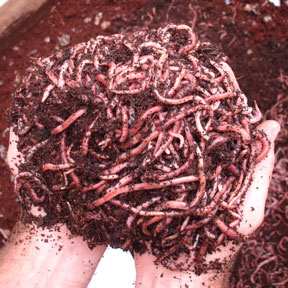 Worm composting, or vermiculture, is one of the easiest ways to recycle food waste because it can be done indoors and is ideal for people who live in apartments and do not have a yard. Vermicomposting is the practice of taking your organic waste and turning it into nutrient-rich fertilizer with the help of worms. If you want to be sure to get composting done at a faster rate and have rich, dark soil, then vermicomposting is right for you.

Vermicompost is more rich in nutrients than the compost from a regular backyard composter. It also performs better as a planting medium than a commercial potting mix with added nutrients. Worm castings, which are produced from vermicomposting, also hold moisture better than plain soil and contain worm mucus which allows for the prevention of nutrients being washed away at first watering.

The best worms to use in vermiculture are red wigglers or Eisenia foetida. These worms live well in highly populated conditions and they don't burrow. Red wigglers will eat about half of their weight in food a day. That means if you have one pound of worms you can feed them a half pound of food per day. Also, your worm population will double in size about every three months, but they will not overpopulate your worm bin. Red wigglers are self regulating, so they know when there isn't room for more.

Worm castings, worm poop, black gold or whatever you want to call it, all consists of the same thing: highly concentrated, nutrient-packed fertilizer that you can use for your garden and house plants.