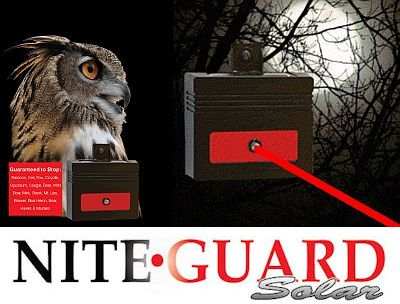 1.Remove the black, protective tape that covers the solar panel.
2.Install the light in the area to be protected and where it will receive about 4-hours of daylight (See “Positioning Your Nite Guard” below).
3.Each unit has a tab on the top which will accept a screw for mounting on a post or stake. Even though they are very well built, do not attempt to hammer on or jar the unit excessively as this could cause internal damage.
NOTE: Nite Guard will begin to operate the very first night, however, it will take 3-4 days for the light to be become fully charged. If the light is placed in an area where it will not receive enough sunlight to maintain its charge you may see the operation of the light become weak or even stop. In this situation, simply place the light in direct sunlight for a 1-2 day period or until fully charged. This product is designed for outdoor use. It is light sensitive, meaning it provides protection all night ... dusk to dawn.

Predator type animals are very determined to get at your poultry, livestock, or crops and will circle the entire area searching for a safe entry. They must see the flash to be repelled, therefore the correct positioning of the light is critical. All four sides of the area must be protected by the flash—this may require 4 or more Nite Guard units. You will be the best judge of the final positioning of your Nite Guard because each area is different in terms of terrain, buildings, high grass, brush, and trees. Position the lights at approximately eye level with the predator to be stopped and make every effort to mount the lights in an open area. The flash can be seen from up to a half mile away and the predators will shrink back from it the instant they are aware of it. Be creative with your positioning using the suggested mounting instructions as a guideline.

Maintenance Free: Nite Guard is weather proof and has been tested to withstand rain, snow and ice. It was subject to the full fury of Hurricane Katrina and did not miss a beat. It will also operate fully in below zero temperatures.

Off-Season Storage: Storing the light during “off-season” will extend the Nite Guard lifespan. Simply place the light indoors where daylight will not hit the solar bar. The light will automatically deactivate after a day or two. To reinstall, follow the same instructions as you would a new light.

Four Nite Guard lights placed on a single stake 4 feet high, each light facing a different direction. Moving the Nite Guard lights and stake every 7 to 10 days is absolutely critical as it breaks the pattern that deer may get used to. You do not have to move them far, 20 or 30 feet is fine, more is better. If you do not move the post with the lights around the deer will begin to “pattern” them in the exact position night after night, thusly losing fear of the flash.

NOTE: Deer are perhaps the most destructive nocturnal animal in modern times, they are also the most intelligent. Deer are very hard to deter from an area and, with the exception of the Nite Guard, will ignore most attempts to stop them from getting at the food that they want. The also act differently than a predator type animal and so we need to approach the placement of the lights differently.

You could also use a perimeter type placement against deer, placing lights 100 feet apart and approx. 4 feet high. Again, you will need to move the lights around every 3-10 days to break the pattern. Suggestion: Use the Nite Guard in conjunction with some of the other “weapons” they may already have in their “arsenal” against deer. Most people with deer problems are very well away of the deer’s intelligence and know that they get used to things easily. Use the Nite Guard lights along with some type of “repellant spray”. The deer then will not only “see” the predator (the flash of the light), but they will also “smell” the predator. This can be a very powerful deterrent for those deer that seem impossible to repel. You will be able to outsmart deer and protect your gardens and crops with the Nite Guards!

Four lights mounted at least 10-14 feet in the air on a single post are required. Each light should face a different direction; North, South, East and West. Hawks and owls often attack from low tree limbs so 10-14 feet will put the lights at eye level. If lights are located on a hill, adjust Nite Guards lower. If lights are in a valley adjust lights higher. This is critical as the raptors may come in from above or below the lights in these areas.

Note: Nite Guard provides protection at two critical times of the day--dusk and dawn. This is important because, hawks in particular, are active during these times and are repelled by the dusk/dawn flash. This results in them often times leaving that area permanently even though they do much of their kills during the daylight hours when Nite Guard is not activated.

For predators like raccoon, opossum and skunk; put lights approximately 25 feet apart, around your entire perimeter (all four sides of the area) and place them eye level to the predators approximately 10-12 inches off the ground. If the area has sides longer than 50 feet, more lights should be used on each side. Face lights outward from protected area.

For predators like fox, coyote, bobcat, wild boar, mountain lion and bear; put the lights approximately 100 feet apart around your entire perimeter (all four sides of the area) and place them eye level to the predators which is approximately 20-25 inches off the ground. If the area has sides longer than 100 feet, more lights should be used on each side. Face lights outward from protected area.

Q: How does the Nite Guard work?

This is a state-of-the-art solar powered unit that emits a red, flashing light. The unit is light sensitive turning on at dusk and turns off at full daylight. No switches, it’s all automatic. It has a very high quality solar panel on the top of the unit that charges with direct daylight (does not have to be sunlight). The flash of the light is what stops the predator. Animal behavior experts, through scientific research, have determined that predators feel threatened because they believe that flash to be the eye of another organism. The sense of being watched is the greatest fear night animals have.

Q: How do the lights get powered?

Upon receipt of the Nite Guard make sure to remove the black, protective tape that covers the solar panel. Simply install the light in the area to be protected and where it will receive about 4 hours of daylight. Nite Guard will begin to operate that very night, however, it will take 3-4 days for the light to be fully charged. This product is designed for outside use. Because it is light sensitive, Nite Guard provides protection at two critical times of the day--dusk and dawn.

Q: Do I need batteries for the Nite Guard?

No. The Nite Guard is solar powered, so there are no batteries to change or electric cords to plug in.

Q: Is the Nite Guard weather-proof?

Yes. They are completely sealed to protect them against moisture and all inside components are silicone coated for protection. Nite Guard will actually work completely submerged in water or ice and will function to a minus 20 degrees below zero.

Q: How long will the Nite Guard work?

The average life of a Nite Guard is 3 years, if the light is used continually. We have had some lights that have lasted for up to 5 years, but the norm is 3 years. If the lights are used seasonally they will last much longer. You can store their lights in a dormant stage by bringing them indoors where daylight will not hit the solar bar.

Q: How far does the Nite Guard work?

High in the air the light can be seen for a long distance, depending on the lay of the land. A flat, open area with four Nite Guards placed at 10’ for owls will protect an area 1/2 mile in each direction, even at 3 feet off the ground a range of several hundred yards is common. The predator stops the instant they see the flash. They do not come in to investigate.

Q: What other predators does the Nite Guard work against?

Every night predator will be repelled by the flash of the Nite Guard : deer, fox, opossum, bobcats, coyotes, muskrats, raccoons, bear, cougar, mountain lion, wild boar, mink, skunk, weasels, blue heron and hawks. If you are experiencing problems with a predator not listed here, please contact us to see if the light will work against that predator.

Q: Is there a guarantee on these lights?

Yes. Nite Guard offers a one-year guarantee on the lights.

Q: Will the flashing light be annoying to my neighbors or alarm my own livestock?

No. Your livestock and any other domestic animals will not be affected by the flash. It is not an annoying strobe type flash therefore will not attract undue attention; however predators see it instantly because of their wary nature. Most neighbors and anyone else will believe the lights to be a security system of some kind in place and this is a good thing.

Q: Could I use the light as a security system?

Yes. We have many customers that use the lights at their cabins or property. The red flashing light located near an entry door or driveway can give the impression that a security system is installed there.

Q: How do I mount the Nite Guard?

Each unit has a tab on the top which will accept a screw for mounting on a post or stake. Even though they are very well built, do not attempt to hammer on or jar the unit excessively when installing.

Q: Does the light only work in one direction?

Yes, it is one directional and has an approx. 30 degree angle of sight as one moves to the right or left away from it. This explains the need for spacing between lights.

Q: Can I buy just one light?

Yes, however, remember the lights are one directional and we have found if multi-light (4 or more lights) settings are not used, the predator will circle and come into the kill area from a direction where they do not see the flash. Night predators are smart and determined to enter your area, especially if they have already been in there. Most ground predators will attempt to approach from the direction where the lights are not flashing.