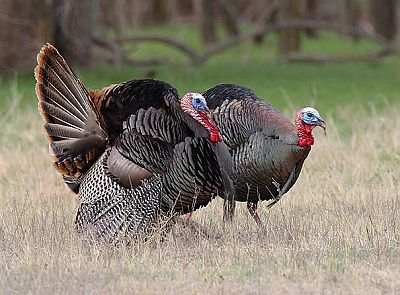 The Wild Turkey was a very important food animal to Native Americans, but it was eliminated from much of its range by the early 1900s. Introduction programs have successfully established it in most of its original range, and even into areas where it never occurred before.

Conservation Status
Populations dropped drastically in 19th and early 20th century because of hunting and habitat loss. Northeastern populations were eradicated. Stocking programs successfully reintroduced turkeys to most of eastern range, and to areas outside the ancestral range in West. Populations continue to increase.

Cool Facts
A native of North America, the turkey is one of only two domesticated birds originating in the New World. The Muscovy Duck is the other.

European explorers took Wild Turkeys to Europe from Mexico in the early 1500s. They were so successfully domesticated in Europe that English colonists brought them back with them when they settled on the Atlantic Coast. The domestic form has retained the white tail tip of the original Mexican subspecies, and that character can be used to distinguish wandering barnyard birds from wild turkeys which have chestnut-brown tail tips.

The male Wild Turkey provides no parental care. When the eggs hatch, the chicks follow the female. She feeds them for a few days, but they quickly learn to feed themselves. Several hens and their broods may join up into bands of more than 30 birds. Winter groups have been seen to exceed 200.

Attempts to use game farm turkeys for reintroduction programs failed. In the 1940s wild birds were caught and transported to new areas, where they quickly became established and flourished. Such transplantations have been responsible for the spread of the Wild Turkey to 49 states.