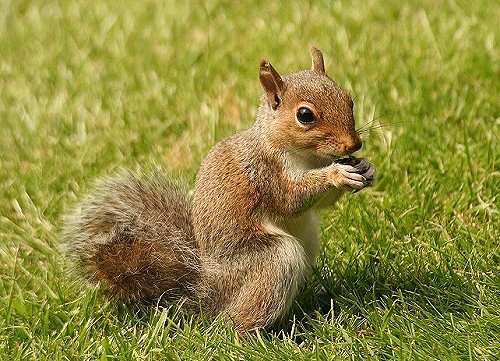 Mel's Attracting Squirrels Video - Turn up the sound and enjoy! 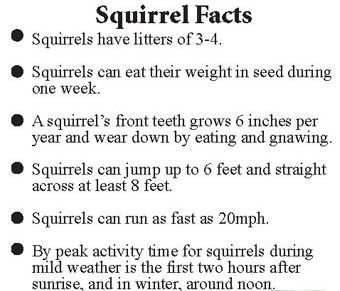 Range: Eastern U.S. east of s Manitoba, e North Dakota, most of Iowa, e Kansas, e Oklahoma, and e Texas. This species has also been introduced to many locations outside of its native range including San Francisco CA and Seattle WA.

Discussion: Especially active in morning and evening, the Eastern Gray Squirrel is abroad all year, even digging through snow in intense cold to retrieve buried nuts. The only large squirrel in much of the northeastern U.S., it feeds especially heavily on hickory nuts, beechnuts, acorns, and walnuts. It does not cache nuts where it finds them, but carries them to a new spot, burying each nut individually in a hole dug with the forefeet and then tamped down with the forefeet, hindfeet, and nose. Most nuts are buried at the surface, with few more than 1/4 inch (6–8 mm) below the ground. In this fashion, many trees are propagated, although the animal may nip off the germinating end of the nut before burying it, which prevents germination. About 85 percent of the nuts may be recovered. Nuts buried by scientists conducting an experiment were recovered by the squirrels at about the same rate as nuts they buried themselves, indicating that memory is not involved in nut recovery. This squirrel can smell buried nuts under a foot of snow; when snow is deep, the squirrel tunnels under it to get closer to the scent. Besides nuts, the Eastern Gray Squirrel feeds on a great number of other items as available, including maple buds, bark, and samaras, tulip tree blossoms, apples, fungi, and a wide variety of seeds, as well as the occasional insect. These squirrels are ever on the move about their home ranges, so are always abreast of the many potential food items. They usually feed on just one food at a time, changing the item as additional sources come along. Buried nuts and other items are the mainstays in winter and in spring, but other foods are heavily consumed as they ripen. There is a great increase of activity in fall, when the squirrels spend most of their time cutting and burying nuts. Sometimes there is a rain of nuts on the forest floor, especially when the animals cut white oak acorns. The Eastern Gray Squirrel dens in trees year-round, using either natural cavities, old woodpecker holes, or leaf nests in stout mature trees or standing dead ones, especially white oaks, beeches, elms, and red maples. Tree cavities must be at least 12 inches (300 mm) deep and have an opening at least 3 inches (75 mm) in diameter. Both males and females build winter nests and more loosely constructed summer nests, which are likely to be near dens but are not always in the same trees. Rough population estimates have been made by assuming one and one-half leaf nests per squirrel. Leaf nests are difficult to spot in summer because they are made of green leaves, but nests are very obvious in winter. The more permanent nests are woven together well to weather the elements. Extremely ramshackle nests may have been damaged by the elements but are likely to have been built by juveniles or as temporary shelters near corn or other attractive crops. The Eastern Gray Squirrel mates in midwinter; a mating "chase" is often involved, with several males following a female as she moves about during the day. Frequently the spring litter of young is born in a tree cavity, while the second, late-summer litter is born in a leaf nest. Females often move their litters back and forth between cavity dens and leaf nests, perhaps because of changes in the weather or to escape predation or parasite infestation. The young are weaned in about 50 days. The second litter stays with the female over the winter. The characteristic aggressive bark of the Eastern Gray Squirrel—que, que, que, que—is usually accompanied by flicks of the tail. It makes other calls as well, including a loud, nasal cry. This animal’s tail is used primarily for balance in trees, but serves as a sunshade, an umbrella, a blanket, and a rudder when swimming; it gives lift when the squirrel leaps from branch to branch and slows descent should the squirrel fall. Overpopulation may trigger major migrations of this squirrel species. In the early 19th century, when vast tracts of the East were covered by dense hardwood forest, observers reported migrations in which squirrels never touched ground but moved great distances from tree to tree. A major migration of thousands of squirrels took place in October 1968 in Tennessee, Georgia, and North Carolina. This movement was attributed to substantial nut production and a high reproduction rate in 1967, followed by a late frost and little nut production in 1968. Black and gray phases of this species often are found together, leading some to think they are two different species. There are albino colonies in Olney, Illinois; Trenton, New Jersey; and Greenwood, South Carolina.