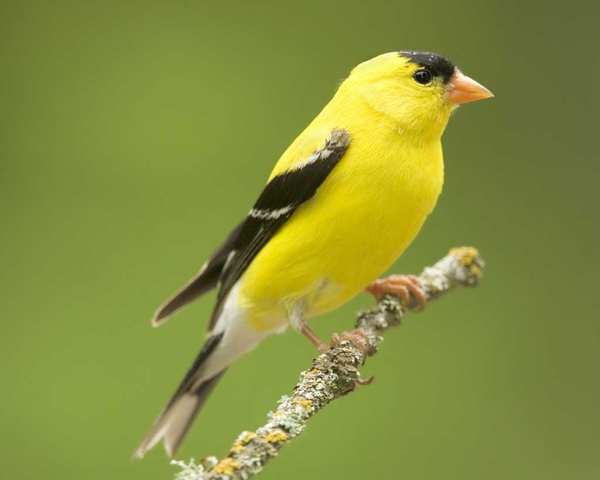 Mel's Attracting Goldfinches Video - Turn up the sound and enjoy!

Nesting: 4 or 5 pale blue eggs in a well-made cup of grass, bark strips, and plant down, placed in the upright fork of a small sapling or a shrub.

Voice: Bright per-chick-o-ree, also rendered as potato-chips, delivered in flight and coinciding with each undulation.

Discussion: Since this goldfinch's main food is seeds, nesting does not begin until midsummer or late summer, when weed seeds are available. Thus goldfinches remain in flocks until well past the time when other species have formed pairs and are nesting. Because they nest so late, only a single brood is raised each season. They migrate in compact flocks with an erratic, "roller coaster" flight. Studies of their winter migrations from Vancouver, British Columbia, and Washington State have shown that these birds hesitate before flying across water. In one instance, some returned to the mainland. One by one, the whole flock followed suit. Ten minutes later they returned to the waterside, chattering noisily. Many birds then continued on. Those remaining repeatedly took wing only to veer off and again return to land. Finally, a sharp drop in temperature forced the birds to complete their migration.