How To Keep Birds From Crashing Into Windows 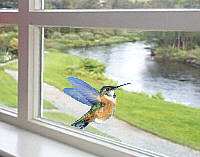 A thump on your window usually means that a bird has crashed into the glass, sometimes stunning, injuring or even killing itself in the process.

Birds fly into windows for several reasons, according to Jeff Picton, executive director of Chintimini Wildlife Rehabilitation Center in Corvallis, OR. Most reasons are related to the fact that they don't see the glass for what it is - a solid barrier.
"A window may reflect nearby shrubs and trees and a bird may think it is just flying into some vegetation when it instead crashes into the glass," explained Picton. "Or a bird seeing its own reflection in the window may think it can fly to where the 'other' bird is.
"In the case of large picture windows, a bird may be able to see all the way through a building and think that is has a clear flight path through open space," Picton added. "Houseplants hanging inside a window may give a bird the illusion that it can fly into the plants. Instead, it flies into the glass first."
Sometimes predator birds, such as sharp-shinned hawks, chase songbirds gathered at feeders. The predators or the prey may fall victim to a window.
Or a bird may be intoxicated on fermented berries or fruits, becoming inadvertent victims of their own drunkenness.
Picton and Nancy Allen, an Oregon State University Extension wildlife instructor, suggest the following techniques for helping reduce the hazards windows pose for birds:

If the bird is not in danger from cats or other predators, leave it alone. If you feel the bird might be threatened, pick up the bird gently using a towel. Place it in a well-ventilated box. Put the box into a quiet, dark place such as a closet. Do not try to feed or give water to the bird. Do not handle it further. If you hear the bird moving around, open the container outside and let it fly away if it can.

"Often these birds suffer from mild concussions from which they will recover if they are left alone out of harm's way to rest for a while," said Picton. "You may be able to release the bird yourself after it has recovered."
If the bird does not recover in a few hours, contact your local wildlife rehabilitation center for further instructions.
Credits to Oregon State University Extension Service, Corvallis, OR