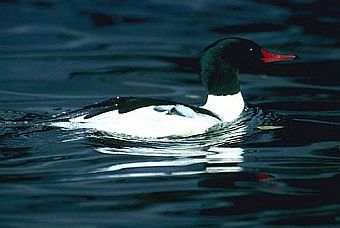 Nesting: 9-12 pale buff or ivory eggs in a down-lined tree cavity or sometimes on the ground or in an abandoned hawk's nest.

Discussion: Although preferring to feed on lakes, Common Mergansers are often driven to rivers by cold weather; there they are found in flocks of 10 to 20 birds, all facing upstream and diving in pursuit of fish. The narrow bill, with a hooked upper mandible and fine, saw-like teeth along the edges, is specialized to catch slippery fish. Pairs are formed in late winter, and until then one is likely to find flocks composed entirely of males or of females.