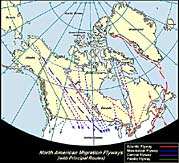 The routes followed by migratory birds are numerous, and while some of them are simple and easily traced, others are extremely complicated. Differences in distance traveled, in time of starting, in speed of flight, in geographical position, in the latitude of the breeding and wintering grounds and in other factors all contribute to great diversity. No two species follow exactly the same path from beginning to end; geographical groups of species with an almost continental distribution may travel different routes.

Bird migration is generally thought of as a north-and-south movement, with the lanes of heavier concentration following the coasts, mountain ranges and principal river valleys. In general, it may be said that the great routes of migration do conform very closely to major topographical features when these happen to lie in the general direction of the travel to be performed. It happens to work out nicely in North America where the coasts, mountain chains and come of the larger rivers do not depart from a north-and-south alignment.

The terms "migration route" and "flyway" are to some extent theoretical concepts, while the latter has, in addition, come to have an administrative meaning. Migration routes may be defined as the lanes of individual travel from any particular breeding ground to the winter quarters of the birds that use them. Flyways, on the other hand, may well be conceived as those broader areas in which related migration routes are associated or blended in a definite geographic region. They are wide arterial highways to which the routes are tributary.

There are four (4) major North American flyways that have been named the Atlantic, the Mississippi, the Central and the Pacific Flyways. Except along the coasts, the flyway boundaries are not always sharply defined and both in the northern breeding, and the southern wintering, grounds there is more or less overlapping. As a matter of fact, in the region of Panama, parts of all four flyways merge into one. 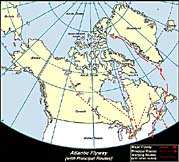 The Atlantic Flyway may be described as extending from the offshore waters of the Atlantic Coast west to the Allegheny Mountains where, curving northwestward across northern West Virginia and northeastern Ohio, it continues in that direction across the prairie provinces of Canada and the Northwest Territories to the Arctic Coast of Alaska. The flyway embraces several primary migration routes and many more that are important as tributaries, some of the latter being branches from primary routes of other flyways. The Atlantic Flyway route from the northwest is of great importance to migratory waterfowl and other birds some of which are flocks of Canvasbacks, Redheads and Lesser Scaups that winter on the waters and marshes south of Delaware Bay. The coastal route of the Atlantic Flyway, which in general follows the shore line, has its northern origin in the eastern Arctic islands and the coast of Greenland. This is a regular avenue of travel, and along it are many famous points for the observation of migrating land and water birds.

There is one route (not shown in image) that may be considered although it is so exclusively oceanic that it is included under "Pelagic Migration." This lane of travel passes directly over the Atlantic Ocean from Labrador and Nova Scotia to the Lesser Antilles, and across a group of small islands to the mainland of South America. It is not known to be used by any of the smaller land birds, but is followed by thousands of water birds and by shore birds of several species. Since it lies over the sea, this route is definitely known only as its terminals and from occasional observations that have been made in Bermuda and the Antilles. In the autumn, some of the shore birds that nest on the Arctic tundra of Mackenzie and Alaska fly southeastward across Canada to the Atlantic coast and finally follow this oceanic course to the mainland of South America.

Many of the birds that breed east of the Allegheny Mountains parallel to seacoast, move southwestward in fall, a direction they apparently maintain from northwestern Florida, crossing the Gulf to the coastal regions of eastern Mexico where they have a land route for the balance of the journey. A more direct route involving even longer flights lies directly across the Caribbean Sea, but despite that fact it is used almost entirely by land birds. After taking off from the coast of Florida, the migrants on this route find only two land masses in their course where they can pause for rest and food. Over 60 species cross the 150 miles from Florida to Cuba, where about half of them remain for the winter. Others fly the additional 90 miles between Cuba and Jamaica. From that point to the South American coast, there is a stretch of unbroken ocean 500 miles across, and scarcely a third of the North American migrants leave the forested mountains of Jamaica to risk the perils of this ocean trip. 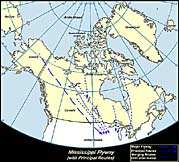 This flyway is relatively simple although it presents some features of interest, chiefly as they affect the migratory waterfowl. It's eastern boundary runs through the peninsula of southern Ontario to western Lake Erie, then southwestwardly across Ohio and Indiana to the Mississippi where it rather closely follows the river to its mouth. The western boundary does not have such precise definition as the eastern boundary, and for this reason in eastern Nebraska and western Missouri and Arkansas the Mississippi Flyway merges imperceptibly into the Central Flyway. The longest migration route of any in the Western Hemisphere lies in this flyway. It's northern terminus is on the Arctic coast of Alaska and its southern end in Patagonia. During the spring migration some of the shorebirds traverse the full length of this great artery and several species that breed north to Yukon and Alaska must twice each year cover the larger part of it. For more than 3000 miles, from the mouth of the Mackenzie to the delta of the Mississippi, this route is uninterrupted by mountains. There is not even a ridge of hills on the entire route that is high enough to interfere with the movements of migrating birds, and the greatest elevation above sea level is less than 2000 feet. Well timbered and watered, the entire region affords ideal conditions for the support of hosts of migrating birds. The two rivers that mark it, the Mackenzie emptying on the Arctic coast and the Mississippi in the Gulf of Mexico, have a general north-and-south direction, another factor in determining the importance of this route which is used by large numbers of ducks, geese, shorebirds, blackbirds, sparrows, warbler and thrushes,

The majority of North American land birds, seeking winter homes in the tropics, that come south through the Mississippi Flyway take the short cut across the Gulf of Mexico in preference to the longer, though presumably safer, land or island journey by way of Texas or the Antilles. During the height of migration some of the islands off the coasts of Louisiana and Texas are wonderful observation places.

It was once thought that most of the North American birds that migrate to Central America made a leisurely trip along the west coast of Florida, crossed to Cuba and then made the short flight from the western tip of that island to Yucatan. The map will suggest this as the most natural route, but as a matter of fact, it is used by only certain swallows and shorebirds, or an occasional individual of some other species that has been driven from its accustomed course. 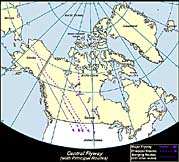 In the United States, the Central Flyway merges toward the east with the Mississippi Flyway and bounded in that direction by the Missouri River. In the south on this side, it runs through western Missouri, Arkansas and Louisiana, and then follows the Gulf coast of Mexico southward. On the northwest Arctic coast, where this great flyway has its beginning, the same territory involved that also sends hosts of migrants down the Mississippi Flyway, but farther south, in Canada, the western boundary follows closely the eastern base of the Rocky Mountains. In western Montana, however, the continental divide is crossed and the line passes through the Great Salt Lake Valley and then somewhat east of south across the tableland of Mexico. It may be called "the flyway of the Great Plains" as it encompasses all of that vast region lying between the valley of the Mississippi River and the Rocky Mountains, the principal wheat-growing region of both Canada and the United States.

On its western boundary is an important breeding area for waterfowl at the northern end of Great Salt Lake, Utah. The Central Flyway is relatively simple, as the majority of the birds that use it make direct north and south journeys from breeding grounds in the North to winter quarters in the South. 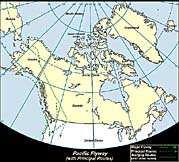 The Pacific Flyway includes the Arctic archipelago as Melville, Banks and Victoria islands from which region the eastern boundary tends to the southwest between Great Bear and Great Slave lakes to the western boundary of the Central Flyway along the eastern base of the Rocky Mountains in Canada. The territory of this flyway, comprises the western Arctic, including Alaska and the Aleutian Islands and the Rocky Mountain and Pacific coast regions of Canada, the United States and Mexico, south to where it becomes blended with other flyways in Central and South America.

The passage of gulls, ducks and other water birds at Point Barrow, Alaska and at other points on the Arctic coast may be the best defined Arctic route in North America. This route across the Alaska Peninsula and the Gulf of Alaska and parallels the coast line of British Columbia, Washington, Oregon and California. The Pacific oceanic route is used by the Arctic Terns that breed in Alaska and those from the more western tern colonies of Canada. The vast delta region of the Yukon River in Alaska is a breeding ground for many species of waterfowl and this area marks the northern terminus for some of those that use the coastal route for most of all of their migratory flights.

The longest and important route of the Pacific Flyway is that originating in northeastern Alaska and passing for most, if not all, of its length through the interior. Most of the waterfowl that travel the United States section of this route come from Alaska and the Mackenzie Valley and other interior areas. Starting in Alaska, Yukon and Mackenzie, this route runs southward through western Alberta. The Pacific Flyway element apparently closely parallels the eastern foothills of the Rocky Mountains. Near the international border, the route branches and while large flights continue southeastward into the Central and Mississippi flyways, others turn southwestward across northwestern Montana and the panhandle of Idaho, follow along the Snake and Columbia River valleys and then turn southward across central Oregon to the interior valleys of California. Suitable winter quarters for birds are found in California from the Sacramento Valley south to Salton Sea and in the tidal marshes near San Francisco Bay.

The southward route of migratory land birds of the Pacific Flyway that in winter leave the United States extends through the interior of California to the mouth of the Colorado River and on to the winter quarters that are principally in western Mexico.