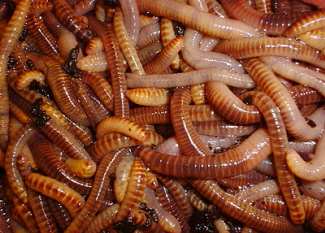 Instructions on caring for the worms you received for fishing bait:

Instructions on caring for composting worms:
Worm Bins
The type of home composters vary widely from simple plastic trays to a commercially available worm bins.  The type of worm bin needed basically depends on a person's composing needs and price range.
A basic bin should be at least 8"-16" deep with a lid to keep out flies and rodents, holes in the bottom (1/4" or smaller) for ventilation and drainage (raise bins on bricks or wooden blocks and place a tray underneath to capture excess liquid, which can be used as worm tea (liquid plant fertilizer).
We also proudly carry The "Original" Worm Factory Composting System.  The Worm Factory comes with full instructions and everything you need to get started.  Available as a 3-Tray, 4-Tray or 5-Tray system.  It is made in the USA, is constructed from high quality recycled plastic, and has a limited 5-year warranty on materials and workmanship.  Click here for more information. 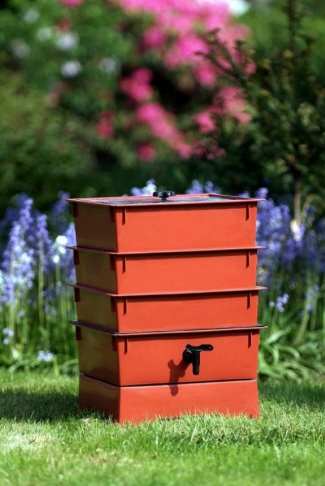 The "Original" Worm Factory 3-Tray System.
Bedding Materials
Black and white newspaper is a good item to use as bedding materials.  Newspaper must be torn into strips about one-inch wide and moistened.   One to two inches of soil or compost (which does not contain chemical fertilizers) should also be added as bedding material.  When new food is added, the food needs to be buried or new compost added to cover the food.  Every few months, a handful of soil, ground limestone, or well-crushed eggshells should also be added for grit and calcium and to control Ph.   Try to vary the bedding in the bin to provide more nutrients for the worms and create a richer compost.
Moisture
Worms require moisture to breathe and their bin should not be allowed to dry out.  It is important to have sufficient moisture; however too much extra water may cause the worms to drown.

Food
Worms are voracious eaters.  Once they get settled in, they will require a good supply of suitable food.  They like most vegetables and fruit scraps (except onions and citrus).  As worms do not have teeth, scraps should be cut into small pieces.

DO NOT compost the following:

NOTE:  Bury food/garden scraps into bedding or add new layer of compost/soil over food
Location
Worm bins can be used indoors or outdoors (during milder months).  Bins should be stored in a warm (65 - 90 degrees for Night Crawlers) and (40 – 80 degrees for red worms), dark, and dry space.  Outdoor bins can be kept in sheds and garages, on patios and balconies, or in the yard.  They should be kept out of hot sun and heavy rain.

Maintaining Worm Bin
Once the bin is set up and worms have settled in, there is little to do except adding food and making sure there is adequate moisture until about two and a half months have passed.  During this time, it is important to separate the worms from the finished compost, otherwise the worms will begin to die.  There are several ways to this.

(1)  Move the finished compost over to one side of the bin and place new bedding and food in the space created.  The worms will gradually move over and the finished compost can be skimmed off as needed.
(2)  A second way is to dump the entire contents of the bin into a large plastic tarp or plastic sheet and separate the worms manually.  Watch out for any tiny football shaped cocoons which contain between two and 20 baby worms.  Mix in a little of the worm castings with the new bedding of the next bin and store the rest in plastic bags for use as required.    OR
(3)  Using our Worm Factory Composting System, all you need to do is remove the bottom tray with finished compost (the worms have already moved up to the upper trays where there is fresh food available.)  VERY EASY!!