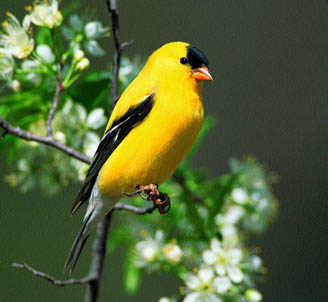 The American Goldfinch is one of the most colorful and conspicuous song birds. It is often called the Wild Canary because the male, except for his black forehead, wings and tail, is bright lemon yellow and has such a sweet ecstatic song. It is a bird of the open places and so fond of companionship that, except while nesting, they are usually seen in flocks and, like robins, have little fear of people. The finch is attracted to thistle and will come to a thistle feeder, many times in groups. 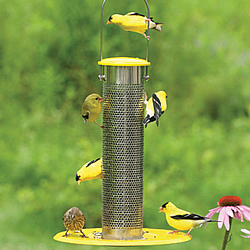 GETTING TO KNOW THE GOLDFINCH

The goldfinch belongs to the largest family of birds which includes the towhees, grosbeaks, buntings, our native sparrows, cardinals, and other finches. All of them have short stout cone-shaped bills and are primarily seed eaters. In spring the goldfinch eats the seeds of last year's weeds, the tender buds of trees and shrubs, and many small insects. In summer and fall, when the fields are crowded with dandelions, thistles, asters, goldenrod, and weeds, it feeds mostly on seeds. 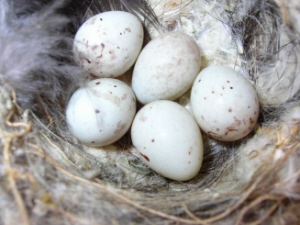 Of all American birds, except for those that raise a second brood in summer,the goldfinch is the last to nest and raise a family. Very few nests are started before July and the number being built, or containing eggs or young, reaches its peak about the middle of August. The compact cup-shaped nest is constructed of the silky fibers of milkweeds and fine grasses or strips of bark from weeds, and usually lined with thistledown.

The goldfinch song is a long series of twittering and warbling notes. Common contact call a "tsee-tsi-tsi-tsit," often given in flight. May be described as "per-chic-o-ree" or "po-ta-to-chip."

INDENTIFICATION OF THE GOLDFINCH

Summer Range of the Goldfinch:

Winter Range of the Goldfinch:

Winters from Canadian border southward to southern United States and into Mexico.

FUN FACTS ABOUT THE GOLDFINCH

Sources: Cornell Lab of Ornithology, and The Birds of North America