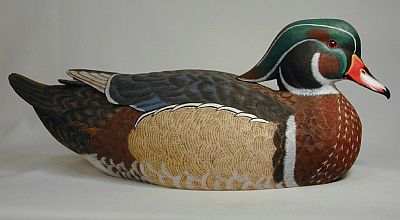 17-21" (43-51cm.). The male Wood Duck is exquisitely colored. He is most easily identified by his smooth, iridescent green crest and crown and his purple face. His throat is white, and two white markings extend up onto the neck and face. His bill slopes downward, and the end of his tail is square.The female is less colorful. She is mainly brown, with a slight iridescence on the crown. Her crest is shorter. She is most easily identified by a distinctive teardrop-shaped, white eye patch.

Distribution and Breeding Habitat
Wood Ducks are found in eastern North America from southern Canada to the southern coast of the United States. They are also found along parts of North America's West Coast. Woodland streams or pools, forest bottomlands, river valleys, swamps, marshes, lakes, and creeks are all typical Wood Duck habitat.

Courtship begins in the fall and continues throughout the winter and into the spring. Yearling males tend to pair later in the season than older males, and unlike other duck species, female Wood Ducks breed during their first year. The breeding season begins in April in the southern portion of the range. In northern areas, Wood Ducks arrive on the breeding ground soon after the ice thaws, usually in early May. There are, however, reports of Wood Ducks in Canada beginning to nest as early as the second week of April.

Before nesting begins, male Wood Ducks defend a small area around the female, a behavior known as mate-guarding. The pair is monogamous for the breeding season. The male remains near the nesting female until the eggs are within a few days of hatching, which is longer than males of other duck species remain with their mates.

Nest Building:  A Wood Duck's nest is typically found 3 to 60 feet off the ground in a natural hole in the trunk or limb of a large tree. Nests are also found in old woodpecker holes and rarely in buildings such as barns. Wood Ducks will readily and successfully use nest boxes.

The nests are not necessarily at the water's edge. Many Wood Ducks nest up to a half-mile away from the water: a distance still close enough that the female can lead her young to water after they leave the nest.

The nest is not formally made, in that the female does not bring any additional material to the nesting cavity. She does, however, add a layer of her own grayish-white down feathers.

Egg Laying: Female Wood Ducks lay one egg each day until the clutch is complete. A complete clutch usually contains 8 to 10 semi-glossy, creamy white, or buff eggs. There may be as few as 6 and as many as 15 eggs, but nest boxes with 40 eggs inside have been documented. Such large clutches are often the result of "egg dumping." In situations where nest boxes are in close proximity to one another, more than one female may lay eggs in a single box. This results in very large clutches that cannot be effectively incubated and subsequently fail. As a rule, it is best to mimic the natural situation by concealing boxes in wooded habitats rather than placing Wood Duck nest boxes within sight of each other. Never fear, the ducks will find them.

Nestling Care: Young Wood Ducks are precocial, meaning that after hatching they are mobile, completely covered with down, and capable of finding their own food. They are brooded by their mother the day after hatching. After 26 to 36 hours, the female remains outside the cavity and beckons for the young. Using their sharp claws, the young climb out of the cavity to join her and follow her to water. Only the female tends the young, and after 63 to 70 days young are able to fly.

Wood Ducks generally have one brood per season, but in the southern portion of the range, two broods in one season have been reported.

Winter Movement and Dispersal
Individuals migrate to more southern latitudes for the winter, heading for places such as Cuba, the Bahamas, and parts of Mexico. During mild winters, some individuals remain near their breeding grounds; Wood Ducks residing in southern North America also tend to be year-round residents.