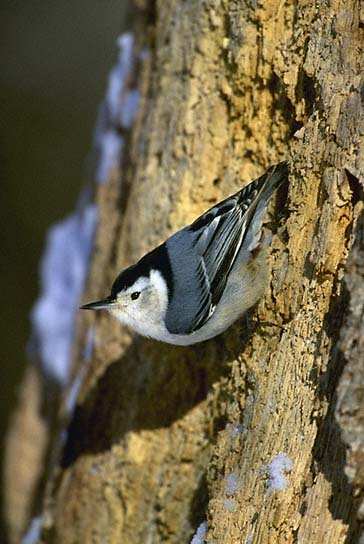 Adult male and female White-breasted Nuthatches look similar, with a bluish black back and white chin, throat, breast, and belly. The sides of the belly and the undertail feathers are rust. The male's cap is black, but the female's is dark gray.

Juveniles look similar to adults, but their breast feathers are whiter especially on the breast. Male and female juveniles can be distinguished by their caps, just like the adults.

Distribution and Breeding Habitat
This species is a year-round resident throughout most of the United States and parts of Canada and Mexico. White-breasted Nuthatches inhabit mature deciduous and mixed deciduous-coniferous forests. Nuthatches prefer to nest near open areas and forest edges. The nest is often located near water, roads, orchards, or fields.

Diet
Nuthatches forage along the bark of trees, gleaning invertebrates such as treehoppers, ants, scale insects, woodborers, and the eggs and larvae of insects. These birds also eat acorns and other seeds and are common visitors to sunflower and suet feeders in the winter. Feeding territories are defended throughout the year. During the fall and winter months, the birds exhibit a behavior called scatterhoarding, in which they hide food items in bark crevices and under leaves, moss, or lichen. During the winter, nuthatches sometimes feed in flocks with other species that feed on their territories.

Pair Formation and Territoriality
White-breasted Nuthatches are monogamous; pairs remain together for many years unless one of the pair disappears or dies. Pair bonds are maintained throughout the year. The pair defends its breeding territory and remains there during the winter months.

During the breeding season, the pair may be seen sweeping their bills back and forth over the bark near their nest hole. This display called "bill-sweeping" can last for several minutes. Often the birds have crushed insects in their bills; it has been suggested that wiping insects against the bark may leave a scent that deters squirrels and other mammalian predators from entering the nest area. Indeed, the insects chosen by the nuthatches often exude toxic or strong-smelling substances.

Nest Building:  White-breasted Nuthatches nest in natural tree cavities, abandoned woodpecker holes, or holes they excavate themselves. They will also use nest boxes. Nests are usually built 3 to 20 meters off the ground. The base of the nest consists of

strips of bark and lumps of earth. The cup is made out of finer materials such as grass and rootlets and is lined with hair, fur, wool, and feathers.

The female begins nestbuilding in early April. During this time, the pair stays in close association, frequently giving contact calls to one another. The male occasionally feeds the female and continues to do so throughout egg-laying and incubation.

Egg Laying: Eggs may be laid as early as mid-April. The smooth, slightly glossy eggs are white, pinkish-white, or cream-colored and are heavily marked with reddish brown, brown, and purplish red spots, which may be concentrated at the larger end of the egg. The clutch size ranges from 5 to 10 eggs, with 8 being the most common number. It is thought that the female lays one egg per day until the clutch is complete.

Incubation: Incubation, which is thought to start with the laying of the last egg, is done by the female and lasts 12 days.

Nestling Care: The female broods the young constantly for a few days after hatching; during this time, the male feeds both the female and the young. As the young become older, the female decreases the time spent brooding and assists the male with feeding the young and removing fecal sacs from the nest. The young remain in the nest for 14 to 17 days, although some sources indicate that they can remain in the nest for up to 26 days. The young are dependent on their parents for food and protection for several weeks after fledging.

White-breasted Nuthatches produce one brood per season. It is unknown whether they produce replacement broods.

Winter Movement and Dispersal
Families remain together on their territories until fall, when the young disperse to find a new territory. The young will remain on these newfound territories all winter and stay on to breed there the following year. The cause and extent of this dispersal is unknown.