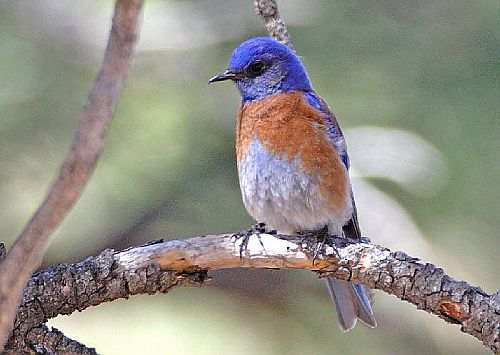 Western Bluebirds are similar in appearance to Eastern Bluebirds. The western species can be distinguished from its eastern relative by the sky blue color of the chin, throat, wings, and tail. Western Bluebirds also have chestnut-red breasts, flanks, and shoulders. In some birds, the back is partially or entirely blue. The belly and undertail coverts are blue gray.

Female Western Bluebirds are less colorful than males. They have a brownish gray head and back, light blue wings and tail, and grayish white throat, belly, and undertail coverts. The breast is a pale rust. The females also have a dull white eye ring.

Distribution and Breeding Habitat
Western Bluebirds can be found in the Southwest and all along the West Coast of the United States. This species is generally residential but moves to lower elevations for the winter months. Western Bluebirds breed in open habitats with scattered trees, such as farmland, orchards, and the edges of open coniferous and deciduous forests.

Diet
Western Bluebirds feast on a variety of invertebrates, including caterpillars, grasshoppers, beetles, ants, and snails. In winter, their diet includes wild berries.

Pair Formation and Territoriality
The breeding biology of the Western Bluebird is similar to that of the Eastern Bluebird. Their breeding season can begin anytime from early April to early May.

Nest Building:  Females build their nests in the natural cavities of snags or rotting trees, in woodpecker holes, or in nest boxes. These nests can be anywhere from 4 to 40 feet above the ground. The nest is a loose collection of grasses, weed stems, and, sometimes, hair and feathers.

Egg Laying: Females usually lay four to six eggs in a clutch, but clutches can range from three to eight eggs. The unmarked eggs are pale blue, bluish-white, or white in color.

Incubation: Only the female incubates the eggs, for a period of 13 to 14 days.

Nestling Care: Both adults tend the young, feeding them mostly soft-bodied insects. After 19 to 22 days, the young fledge, but they don't reach full independence for three to four weeks. The male may continue to care for the young by himself while the female begins to renest. This species is believed to raise two broods per breeding season.