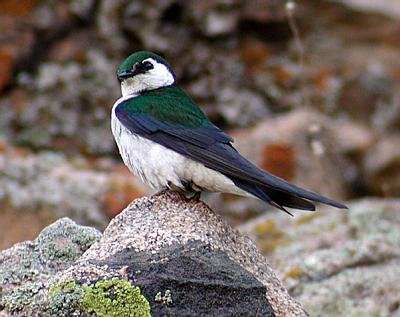 Compared to its close relative the Tree Swallow, little is known about the ecology and breeding biology of the Violet-green Swallow. From the handful of studies done on just a few populations, it appears that Violet-green Swallows are ecologically similar to Tree Swallows. Many questions, however, remain to be answered. Little is known about the mating system, territorial behavior, and juvenile dispersal of these swallows.

Compared to the males, female Violet-green Swallows are dull in color. They are bronze green to bronze purple on the upperparts, and grayish on the forehead, the sides of the head, and the upper breast. The rump and tail feathers are a dull green.

Juveniles are grayish-brown with a faint bronze sheen on the back. The belly is white, but the breast and sides are brown and sometimes mottled.

Distribution and Breeding Habitat
Violet-green Swallows are found from the Rocky Mountains west to the Pacific coast. Their range spans from central Alaska and central Canada south to the Mexico's highlands. Violet-green Swallows prefer open, deciduous, or mixed coniferous-deciduous forests containing ponderosa pine, aspen, willow, and spruce trees. In the northern part of its range, this species breeds at lower elevations on the coast and in wooded canyons. In the southern part of their range, they breed at higher elevations (2,000 to 3,000 meters).

Diet
Violet-green Swallows are aerial feeders, and their diet mainly consists of flying insects such as leafhoppers, beetles, wasps, ants, flies, and bees. They forage off the surface of ponds and occasionally on the ground. Unlike most other swallows, Violet-green Swallows often forage above the tree canopy. If food is abundant (for example, a swarm of insects), Violet-green Swallows forage in small flocks or loose aggregations, with conspecifics and other species. They do not eat seeds or berries.

Violet-green Swallows nest in cliff crevices, natural tree cavities, woodpecker holes, in old nests of Banks and Cliff Swallow, under the eaves of buildings, and in nest boxes. They can nest in close association with Cliff Swallows, Tree Swallows, White-throated Swifts, and Western Bluebirds. One report documented a pair of Violet-greens assisting a pair of Western Bluebirds in raising young. The swallows guarded the nest and tended the bluebird nestlings, and after the bluebirds fledged, the swallows used the nest site.

Nests are built three to five meters off the ground. The female is the primary nest builder. The nest is constructed of stems, twigs, grasses, fur, and horse hair. During egg-laying and incubation, the male brings feathers with which to line the nest. Nest building is accomplished in the morning and early afternoon and can take from six days to three weeks.

Egg Laying: Little information exists on first-egg dates, but first eggs appear to be laid in mid-May. Females lay one egg per day. Laying can begin before the layer of feathers in the nest is complete or may not begin until a few days after nest completion. A complete clutch contains four to six white, unmarked, smooth eggs, with little or no gloss.

Incubation: There are no reports on when incubation begins. The female incubates the eggs,and when the female leaves the nest, the male guards the nest or stands over the eggs to prevent heat loss.

Nestling Care: After 13 to 15 days, the eggs hatch. Hatching is asynchronous; it can take up to five days for all the eggs to hatch. While little information exists on brooding behavior, one female reportedly brooded her young for 10 days after hatching. The diet of the nestlings is unknown but probably consists of insects. The female tends the young, with the male assisting. As with Tree Swallows, the nestlings' fecal sacs are initially removed, but as the young grow older this practice ceases, and the nest becomes dirty.

The young fledge after 23 to 25 days. They are fully developed but still depend upon the parents for food. The age at which the young attain independence is unknown.

If the first nesting attempt fails, pairs will nest again. How soon a pair can begin renesting is not known. Violet-green Swallows have one brood per season; second broods are rare. Pairs do not use the same nest site within a season, but may use it again in subsequent seasons.

Winter Movement and Dispersal
Adult female Violet-green Swallows display extreme fidelity to the breeding site. Approximately 80 percent return to the same breeding area every year. Only half of the returning females, however, use the same nest site they used the previous year. Whether males show similar site fidelity is unknown.

No information exists regarding juvenile dispersal.