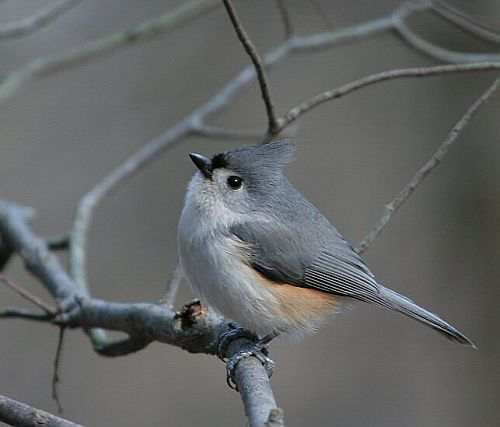 Male and female titmice look alike. The upperparts are all gray, and the belly and breast are a lighter gray or white. The flanks are chestnut or rust in color. The crest is gray, the forehead is black, and the area around the eyes is light gray.

Distribution and Breeding Habitat
The Tufted Titmouse is a year-round resident of the deciduous and mixed deciduous-coniferous forests in the eastern United States. It prefers habitat containing a variety of tree species with a fairly dense canopy and will nest in or near swamps, orchards, parks, and other suburban areas. In the Southwest, titmice are found in riparian and mesquite habitats.

Diet
The diet of the Tufted Titmouse consists of a variety of invertebrates, such as caterpillars, beetles, wasps, ants, bees, treehoppers, spiders, and snails. They glean prey from tree bark and twigs, but they may also forage on the ground. In winter, titmice cache collected seeds and acorns throughout their territories and frequently visit bird feeders. They often forage in mixed flocks with chickadees and nuthatches.

Pair Formation and Territoriality
Tufted Titmice are monogamous, forming pairs that last more than a year. The pair remains on its territory and defends it year round.

Nest Building:  The Tufted Titmouse appears to be ecologically similar to the Great Tit in Europe. But, while the ecology and breeding biology of Great Tits have been studied extensively, information on the Tufted Titmouse is lacking. One reason is that, unlike Great Tits who rely heavily on nest boxes for breeding, Tufted Titmice don't appear to nest readily in boxes, where they could be more easily studied. They prefer to nest in natural cavities, even though the prevalence of these cavities is declining. Nest-box studies could answer some questions about the breeding and juvenile dispersal of the Tufted Titmouse.

Titmice nest in natural cavities, abandoned woodpecker holes, and sometimes in nest boxes. Nest building begins in late March or early April, typically taking 6 to 11 days. The nest, which is constructed of leaves, moss, dried grass, and bark strips, is lined with feathers, fur, wool, cotton, hair, and sometimes snakeskin. The male feeds the female from the time they begin building the nest until the eggs hatch.

Egg Laying: The first eggs can be laid anytime from early April to early May. Titmice living in southern latitudes tend to lay their first eggs earlier than those living in northern latitudes. Females lay one egg per day, and the average clutch size is five to six eggs. The smooth, nonglossy eggs are white to cream-colored and are speckled and spotted with chestnut-red, purplish red, or brown marks, which are usually more densely distributed at the larger end of the egg.

Incubation: Eggs are incubated for 12 to 14 days. Only the female incubates the eggs, and she does not flush readily from the nest. Whenever she leaves the nest, she covers the eggs partially with nesting material.

Nestling Care: After the eggs hatch, the female broods the nestlings for a few days. During this time, the male continues to feed her, along with the young. As the nestlings get older, the female leaves the nest more frequently and helps the male feed them. The young fledge after 15 to 16 days. Although they begin to feed themselves 5 days after fledging, they aren't completely independent for another three weeks.

Titmice breeding in the southern part of their range raise two broods during one breeding season. Pairs in the northern part tend to raise single broods.

Titmice exhibit delayed offspring dispersal. That is, some juveniles remain with their parents on their natal territory during the winter months, forming a family flock. Other juveniles, however, leave the territory and join unrelated family units. Hence, winter flocks tend to consist of two breeding adults, with both related and unrelated juveniles.

In early spring, most young disperse from their winter flocks, establish territories, find mates, and begin to breed. Some individuals, usually the offspring of the breeding adults, remain on their natal territories rather than dispersing. These individuals, or helpers, help their parents raise their siblings.