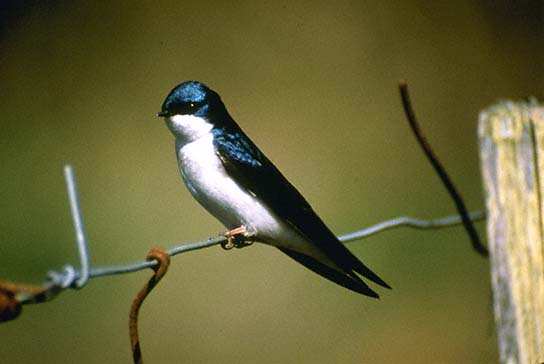 Male Tree Swallows can be identified by their glossy, iridescent, dark blue or blue-green plumage. Their cheeks and entire underparts are white.

Adult females resemble the males but tend to be a little more greenish. It takes two years for females to attain their adult blue-green plumage; thus, females in their first breeding season (in other words, about 10 months after they fledged) are light brown on the back with darker bits of green scattered through the upperparts, especially on the head and wings.

Juveniles are a dull gray brown. The tail and wings are slate brown with a slight greenish tint. The belly and breast are white, and often the breast has a faint gray band.

Distribution and Breeding Habitat
Tree Swallows are found all across the continental United States and Canada, and in parts of Alaska, as far north as cavities are available, avoiding only the southeastern corner of the U.S. In winter, they migrate to Mexico, Florida, and Central America, but they occasionally winter as far north as the mid-Atlantic coast and the central valley of California.

Tree Swallows prefer open habitats, such as the edges of woods, and areas near water, including marshes, shorelines, and swamps. Tree Swallows are quite tolerant of humans.

Diet
Tree Swallows are aerial feeders. They forage over land and water, swerving and dipping to feed on flying insects such as beetles, midges, crane flies, horseflies, ants, moths, grasshoppers, dragonflies, and mayflies. In winter, they sometimes feed on berries, especially those of the wax myrtle. Tree Swallows and Myrtle Warblers are the only birds that can digest these berries, and this might help explain why Tree Swallows winter farther north than any other North American swallow. Tree Swallows forage mainly near their nest sites, either alone or in loose flocks.

Pair Formation and Territoriality
Outside of the breeding season, Tree Swallows are highly social birds. During the breeding season, however, these swallows are territorial and aggressively defend their nests against other Tree Swallows (called conspecifics) and against other species. They are solitary nesters, but they may nest in loose aggregations with nests 10 to 15 meters from one another. They frequently compete for nest sites with House Wrens and House Sparrows.

Arrival at the breeding site is age- and sex-dependent. Generally, older birds arrive at the breeding grounds before younger birds, and males arrive before females. Females arrive up to a week later, and pair bonds form shortly thereafter. Pairs begin to defend their sites immediately.

Although Tree Swallows are generally monogamous, some males may have more than one mate simultaneously. Pair bonds last for the duration of the breeding season. Often, the same pairs will mate in consecutive breeding seasons. This appears to be the result of both sexes returning to the same nest site year after year, rather than the result of a long-term pair bond.

Nest Building:  After returning to the breeding site, Tree Swallows wait before they begin nesting. In Upstate New York, nest building tends to begin in April, but nests are seldom finished before early May. The timing of nest building and all subsequent reproductive activities depends upon latitude and weather. If pairs nest too early in the season, they risk nest failure because of poor weather. Cold, wet weather reduces insect abundance and may cause nesting pairs to abandon their nests in search of food.

Nesting is quite synchronous in Tree Swallows; that is, females tend to begin nesting within a week or 10 days of their neighbors. Tree Swallows nest in natural tree cavities, woodpecker holes, and nest boxes. The female builds the nest. This process is governed by the weather. In typical springs, the nest can take up to three weeks to complete, but if conditions are very good and the birds are late, the nest can be completed in a few days. Nests are typically 1 to 10 meters off the ground, usually composed of dry grasses or pine needles. The nest cup is lined with feathers collected by the male and female. Feathers continue to be added during egg laying and incubation.

Egg Laying: The onset of egg-laying is highly variable. It is influenced by weather and age of the female, rather than how soon pairs return to the breeding site or complete their nest. In some populations, eggs are laid beginning in late April; in others, egg-laying begins in late May. Throughout most of the Northeast, the bulk of egg laying usually takes place in mid-May.

Females lay one egg per day, but there are occasionally large gaps between the laying of consecutive eggs. Eggs are laid in the morning, usually within two hours of sunrise. The eggs are pure white and become slightly glossy after a few days of incubation.

The average clutch contains four to seven eggs. Nevertheless, clutch size is affected by the scarcity of food and lateness in the breeding season. Also, older females tend to have larger clutches than younger females.

Incubation: Incubation begins the day the penultimate, or next-to-last, egg is laid. But in periods of cold weather, a female may postpone the onset of incubation for up to two weeks. This delay does not affect the viability of the eggs or the success of the nest. The incubation period is 14 to 15 days. Females incubate the eggs, but males will guard the nests when females are absent.

Nestling Care: Eggs hatch within one or two days of each other, but bad weather can lengthen the hatching period. Females brood their nestlings for three days, after which they only brood at night and during uncommonly cold weather. The young are fed soon after they hatch, and both parents share this duty equally. In situations where one adult has disappeared, a single parent can raise the young alone. Nevertheless, retarded nestling growth, brood reduction, and starvation are typical outcomes. Fecal sacs are removed from the nest until the young are 14 days old. Nestlings fledge after 16 to 30 days, and many are virtually independent immediately upon their departure.

Tree Swallows have one brood per breeding season. Pairs will nest again if the first attempt fails, but true second broods are extremely rare. The same nest sites are used for more than one breeding season, and pairs will often nest on top of old nests.


In fall and winter, Tree Swallows form migratory flocks that can contain anywhere from a few thousand to a million individuals. They head to the southern coast of the United States, Mexico, and Central America.

In early spring, a small percentage of the young return to their birthplaces. They do not breed on the natal territory itself but rather settle some distance away. This distance varies, depending on the population.

Site fidelity in adults is highly variable. Anywhere between 13 and 60 percent of the birds return to their former breeding territories, the percentage depending greatly upon winter mortality and previous breeding success. Females show less site fidelity than males, especially following an unsuccessful breeding season.