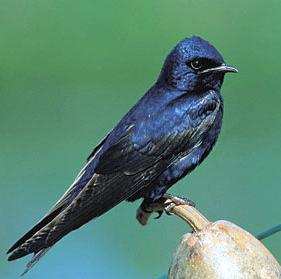 The Purple Martin is the largest of the North American swallows. It takes two years for both males and females to attain their adult plumage, but they can and do breed as one year olds. Adult males that are two years old and older have glossy, purple-black plumage. Adult females are less colorful, with gray necks, foreheads, and underparts, but they can be nearly as purple on their backs as adult males.

Yearling males resemble adult females but can be distinguished by a few distinct purple feathers on the chin, throat, breast, and flanks. Yearling females are less colorful than yearling males and are white underneath.

Distribution and Breeding Habitat
Purple Martins are a migratory species that breeds along the West Coast and in the eastern and central portions of the United States, and in parts of Canada and Mexico. While martin populations have grown in the East, their numbers have declined in the middle of the United States. This species nests in open and semiopen areas, including savannas, cultivated lands, fields, parks, pastures, near lakes and marshes and in towns and suburbs. Purple Martins can reach fairly high densities when nest boxes are present; however, in other areas, they can be completely absent. In the West, martins are less likely to inhabit nest boxes, relying more heavily on natural cavities, but they will nest in gourds and supplied single-unit houses on the West Coast.

Diet
Purple Martins are obligate, aerial insectivores; they feed in flight upon flying insects such as wasps, moths, flies, grasshoppers, bees, and ballooning spiders. They also feed on midges, dragonflies, damselflies, cicadas, stinkbugs, beetles, and butterflies. They are not the mosquito specialists that martin-house manufacturers would have us believe. They forage high above the ground and over water, in loose aggregations.

Pair Formation and Territoriality
Usually the first to return to the breeding site, male martins immediately choose and defend a nest site. Females select their mates based upon the nest site and upon the male himself. Purple Martins are monogamous, but both sexes are highly promiscuous. Once a pair bond is formed, both sexes defend the nest site intensely.Purple Martins nest in colonies, but members of the breeding colony are not related.

Nest Building:  The breeding season begins in late March in the southern part of the range, but not until late May or early June in the northern parts. (In Florida, however, nest building can begin as early as February.) As with many native cavity-nesting species, Purple Martins compete with House Sparrows and European Starlings for nest sites. In many regions, such as the eastern United States, martins are extremely dependent on human-provided nest boxes. In the West, however, Purple Martins nest more frequently in natural sites, such as abandoned woodpecker holes, cliff crevices, and in the cavities of oak, sycamore, ponderosa pine, and spruce trees.

Nest building starts about a month before the first egg is laid. Initially, pairs may begin to build in more than one cavity. But eventually one cavity is chosen, and the male and female build a nest made of grass, stems, twigs, straw, bark, leaves, and mud. The nest cup is lined with fine grasses and green leaves. Fresh green leaves are brought regularly until the eggs hatch. The nest also has a mud or dirt rim that may prevent the eggs from rolling out. This rim also helps keep the weather out, and it may restrict the reach of Great Horned Owls.

Egg Laying: Females start laying eggs as early as April in southern regions (in Florida, in early to mid-March), but they start later in northern regions. The average clutch has four to six white, unmarked eggs. The age of the female influences the clutch size; yearling females lay about one less egg per clutch than older females.

Incubation: Females incubate their eggs for 15 to 16 days. When females are absent from the nest, males may sit on the eggs or sit at the nest entrance to guard it. Males may also stand over the eggs to prevent cooling.

Nestling Care: Hatching is asynchronous; that is, all of the eggs don't hatch at once. Hatching may occur over two to three calendar days. Both adults feed and care for the nestlings. The young fledge after 26 to 32 days; sometimes they stay in the nest longer. As the young leave the nest, the parents try to keep their brood together, but family mixing within the breeding colony often occurs. Sometimes the fledglings are mobbed by members of the colony. The reason for this is uncertain. Some researchers believe this prevents the fledglings from imprinting on the colony site. Others believe it is to keep them from coming back to steal incoming food from younger colony mates in neighboring compartments. The fledglings remain dependent upon their parents for up to two weeks after leaving the nest.

Purple Martins have one brood per season. Two broods during one breeding season is considered rare. They will re-nest if nest failure occurs early in the nesting cycle.

Winter Movement and Dispersal
After the breeding season, Purple Martins assemble into large flocks. Eventually these flocks migrate to parts of South America, including Brazil, the Amazon basin, Bolivia, and Paraguay.