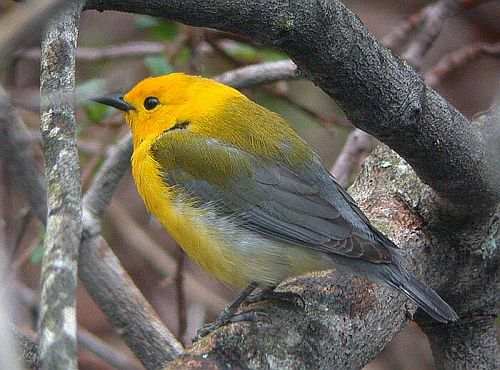 Commonly called the Golden Swamp Warbler, the Prothonotary Warbler is a striking, bright orange yellow color. Adult males are brighter than females and have an orange yellow head and neck and a bright olive upper back. The breast and belly are yellow fading to buff, and the crissum is white. The edges of the wings are bluish gray, but the scapulars are olive green. The rump and tail are bluish gray; white spots on the tail feathers are most conspicuous during flight. The eyes of this species are large, dark and prominent against the bright yellow head. Compared to the bills of other warblers, the Prothonotary’s black bill is relatively long and pointed.

As in many passerine birds, the plumage of the female Prothonotary Warbler is similar to the male’s, albeit less bright and less orange. Her head is tinted with olive, and there is little white in her tail.

Juveniles are primarily a dull brownish olive on the crown, nape, and upper parts. The sides of the head, the throat, and the upper breast are washed-out yellow. The belly is yellowish white and the flanks are grayish olive.

Distribution and Breeding Habitat
The Prothonotary Warbler breeds throughout the eastern United States and also in southern Canada. They prefer areas with stagnant water, such as swamps, ponds, wet bottomlands, and lowland forests subject to flooding. They can also be found near running water with streamside willows.

Diet
This species is primarily insectivorous, eating ants, mayflies, beetles, and the larvae of aquatic insects. They also eat snails. Reminiscent of nuthatches, these warblers cling to and creep along the surface of trees, stumps, and fallen logs, foraging for food.

On their return to their breeding grounds, Prothonotary Warblers arrive in the vicinity of the Gulf of Mexico around late March to early April, rarely as early as late February. Birds that breed in the northern portion of their range usually arrive on their breeding sites by mid-May. Males arrive a few days before the females, establishing territories in the same general area as their previous year’s breeding site. When females arrive, males court them intensely, singing and puffing their feathers in display.

These warblers are monogamous, and the pair bond lasts the entire breeding season. They aggressively defend nest sites from other Prothonotary Warblers and from species such as bluebirds, woodpeckers, wrens, and robins. They compete most intensely with House Wrens for nesting sites.

Nest Building:  The Prothonotary Warbler is the only eastern wood warbler that nests in cavities. They nest over or near water, in natural cavities or abandoned woodpecker holes in dead snags, stumps, and rotten wood. Nests can be from 2 to 12 feet off the ground but are found most commonly at five feet. They also use nest boxes placed in shady areas near standing water. Nests have also been found in other less "natural" places, such as in a glass jar, a boat house, a mailbox, and an old enamel coffee pot.

Males make "dummy nests," but the female alone builds the nest that is used. In preparing the nest site, the female may further excavate an existing cavity. She fills the cavity to the entrance hole with nesting material, forming the nest from moss, lichen, dry leaves, small twigs, and bark strips. The nest is lined with fine grasses and sedges.

Egg Laying: Females usually lay four to six eggs, but clutches with as few as three and as many as eight have been recorded. The eggs are a glossy white with a cream or slightly yellow tinge. They are marked heavily with reddish brown and purplish gray spots and blotches, which may be arranged sparsely to densely. Prothonotary Warblers are frequently parasitized by the Brown-headed Cowbird. These warblers may be declining in some areas due to the combined effects of parasitism, habitat destruction, and competition with other species for nest sites.

Incubation: Only the female incubates the clutch, beginning the day the last egg is laid. The incubation period is about 12 days. During incubation the male often brings food to the female at the nest.

Nestling Care: After 12 days of incubation, the young begin to hatch. For the first few days after hatching, the female continues to sit on the nest, brooding the young to keep them warm. The male feeds both the young and the female during this time. After a few days of continuous brooding, the female leaves the nest periodically. Both adults continue to feed and protect the young, which leave the nest when they are around 11 days old. Young Prothonotary Warblers are reported to be expert swimmers. This survival skill is important since nest cavities often lean over water. If the young jump out of the nest, they can swim to safety.

After fledging, the young continue to be fed primarily by the male as the female concentrates on starting a second brood. In the South, Prothonotary pairs can raise two broods successfully, but in the North two broods are rare.

Winter Movement and Dispersal
Prothonotary Warblers migrate to parts of Central and South America and the West Indies. Adults and juveniles begin to travel south to wintering grounds in late July and mid-August. In the winter, they inhabit mangroves and freshwater swamps. Prothonotaries roost communally on the wintering ground, and pair bonds between males and females persist.