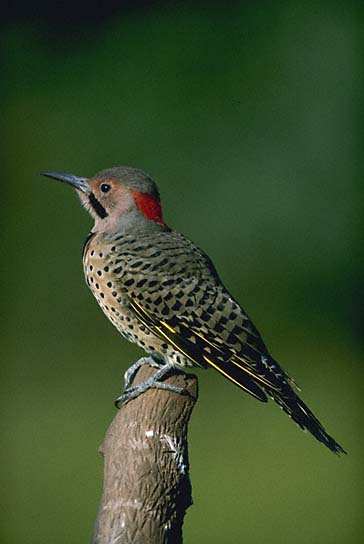 Male and female Northern Flickers look similar. They are grayish brown woodpeckers with horizontal barring across the back and wings. The tail is white with brownish black bars and solid black tips. The breast is light brown to off-white and has blackish brown spots. The upper breast has a black crescent-shaped patch, or bib. The ventral surface and dorsal shafts of the wings and tail can be either bright yellow or salmon, depending on the subspecies. Subspecies also differ in throat color, crown color, and the presence of a red blaze at the nape of the neck. Present only in males is a malar stripe, or mustache, extending from the base of the bill downward below the cheek. This mark is red in some subspecies, black in others.

Juvenile plumage resembles that of the adult, but the colors are less bright. Some features, such as the malar stripe and black bib, are less distinct.

Distribution and Breeding Habitat
Northern Flickers are found throughout the North American continent from below the tree line in Alaska and Canada to Mexico, Central America, and Cuba. The three subspecies found on the North American continent are Yellow-shafted (east of the Rocky Mountains), the Red-shafted (west of the Rocky Mountains), and the Gilded (in the Southwest).

Flickers live in a variety of woodland habitats. They have adapted well to human habitation and occur in urban, suburban, and rural areas, in parks, and near farms and woodlots. They nest near clearings or other open areas, at forest edges, and in forests interspersed with meadows, fields, and clear-cuts. Nests are also found in savannas and near swamps, ponds, and recently flooded areas containing snags. The Gilded Flicker subspecies nests in saguaro cacti.

Northern Flicker numbers have declined over the past 20 years. This decline is thought to result from a combination of factors, including intense competition with the European Starling for nest sites and reduction in possible nest sites due to the removal of dead and dying trees. Although the decline hasn’t reached threatening levels, it is important to monitor the population, for these birds are one of the main species responsible for excavating holes and providing nest sites for many secondary cavity-nesting birds.

Diet
Northern Flickers are the most terrestrial of all North American woodpeckers. These birds are commonly seen hopping along the ground foraging for ants. In fact, flickers eat more ants than any other bird species in North America. Flickers also forage in the trees, where they hawk and glean beetles, wasps, and caterpillars and probe into the bark for insect larvae. They also eat worms, acorns, nuts, and grains. During late autumn, winter, and early spring, flickers consume berries and other fruits of wild trees and shrubs. Occasionally they visit feeders.

Pair Formation and Territoriality
The northern populations of flickers return to their breeding ground from mid-March to early April. A few weeks after their arrival, courtship begins. By late April and early May, pairs have bonded and begun to breed. These birds are monogamous and mate for life, although a bird may find a new mate to replace one that has died or disappeared.

Both the male and female aggressively defend a territory, which consists of the prospective nest site and its immediate surroundings. Vocalizations and "drumming" are used to define and defend territory boundaries. Once incubation begins, however, the pair spends less time defending their territory, and other pairs often move into the vicinity and nest nearby.

Nesting Behavior
Nest Building:  Northern Flickers excavate their nest cavities. They are considered weak excavators, mainly digging their nests in dead or decaying trees that are weathered and have weak wood. It is unknown which of the pair selects the nest site, but the location depends on the presence of weak wood, not on the presence of a particular tree species. In addition, flicker nests have been found in poles, fence posts, haystacks, and ground burrows. These woodpeckers also nest in boxes, but boxes should be packed tightly with sawdust for the birds to excavate. (See "A Nest-Box Plan for Northern Flickers" in Section 1 for details.)

The more closely the nest box imitates a "punky" tree, the more desirable it will appear to Northern Flickers.

The birds can take 12 to 15 days to excavate a cavity. Although both sexes participate, initially the male does most of the excavating, the female finishing the job. No additional nesting materials are brought to the cavity.

Egg Laying: Shortly after the birds finish the cavity, the female begins egg-laying. She lays semi-glossy, pure white eggs early in the morning, adding one egg per day until there are five to eight eggs laid. As few as three eggs and as many as 12 have been reported in a clutch, but larger clutches usually represent eggs from two females. Clutches laid early in the breeding season tend to be larger than those laid later.

Once egg laying begins, the birds never leave the nest unattended. Adults take turns remaining near or at the nest site.

Incubation:  The incubation period for Northern Flickers is 11 to 14 days, and incubation begins one to two days before the female lays the last egg. Both sexes incubate the eggs. The female is most attentive toward the nest during early incubation, but later the male is the more attentive of the pair and remains with the eggs at night.

Nestling Care: The young hatch within one to two days of each other. The female broods the newly hatched young, but as the nestlings grow, female attentiveness decreases and male attentiveness increases. The male remains in the cavity with the nestlings at night. Shortly after hatching, the young can produce a unique buzzing sound, an ability that lasts until they are nearly full-feathered. The nestlings make the sound whenever something approaches the nest cavity and researchers speculate that the noise, which resembles an agitated swarm of bees, may frighten away squirrels and other nest predators.

The nestlings are fed regurgitant by both parents. After three weeks, the young can climb to the entrance and meet the parents for food. After 24 to 28 days, the parents coax the young to leave the nest by withholding food and calling to them. When they leave the nest, the fledglings can fly short distances and they do not return to the nest site. The fledglings depend upon the parents for food and protection for two to three weeks. Family groups are often seen feeding together into late summer.

Northern Flickers usually raise one brood per breeding season, but in the southern part of the range, pairs frequently raise two.

Winter Movement and Dispersal
Some populations of flickers are migratory. The degree of movement depends on subspecies and region. Northern populations tend to migrate in late autumn to the southeastern United States. Migratory groups can consist of a few to a hundred individuals. Southern populations are non-migratory. Although they don’t migrate, these populations make small movements, seeking shelter from winter weather in coniferous forests and swamps. Other populations move from higher to lower elevations.

Flickers maintain winter home ranges, but we don’t know if they defend these areas. First-year adults may return to their natal area to breed for the first time. Older adults are highly site-faithful, returning to a particular breeding site year after year.