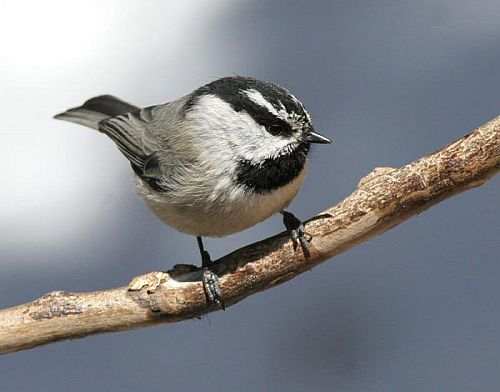 Mountain Chickadees can be distinguished from other chickadees by their white eyebrow, gray flanks, and gray undertail feathers. Males, females, and juveniles all look alike.

Mountain Chickadees are found in the western United States and Canada. They breed at high elevations (5,000 to 11,000 feet) in coniferous and mixed coniferous-deciduous forests. It is a residential species, but some individuals move to lower elevations in the winter.

Nest Building:  Sources report that Mountain Chickadees only excavate nests if other sites are unavailable. This species more readily nests in snags, natural cavities, abandoned woodpecker holes, banks and holes in the ground, under rocks, and in nest boxes. Their nests tend to be low to the ground. Nests are made of moss, bark, fur, plant fibers, and feathers. It is not known which sex builds the nest.

Egg Laying: Female Mountain Chickadees lay one egg per day. Although the average clutch size is 5 to 9 eggs, there may be up to 12 eggs in a nest. The slightly glossy, white eggs are usually unmarked. Occasionally, they have reddish brown specks that may be evenly distributed over the egg or localized at the larger end.

Incubation: The incubation period is 14 days and begins with the laying of the penultimate, or next to last, egg. The male feeds the female as she incubates. Females do not flush easily from their nests, and when disturbed, they often make a hissing sound.

Nestling Care: The female broods the young for a few days after they hatch.

During this time, the male continues to feed the female and begins to feed the nestlings as well. Nestlings fledge after 19 to 21 days. It is unknown whether the young are dependent upon the parents after fledging.

The number of broods produced by Mountain Chickadees each breeding season is unknown. If the first nesting attempt fails, pairs do produce replacement broods.

Winter Movement and Dispersal
Mountain Chickadees do not migrate. Some individuals move to lower elevations for the winter months.

There is no information on juvenile dispersal.