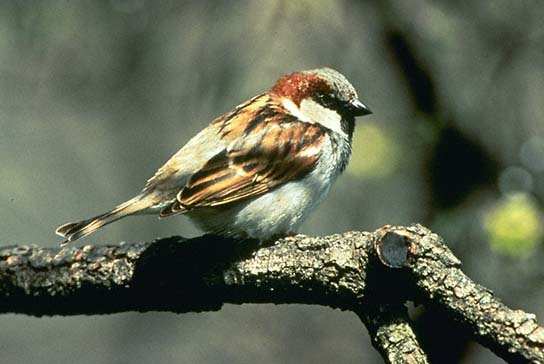 The male House Sparrow has a brown back with black streaks. The top of the crown is gray, but the sides of the crown and nape are chestnut red. The chin, throat, and upper breast are black, and the cheeks are white. Females and juveniles are less colorful. They have a gray-brown crown and a light brown or buff eye stripe. The throat, breast, and belly are grayish-brown and unstreaked.

Distribution and Breeding Habitat
This species was purposely introduced to North America between 1850 and 1870. The introduction was successful, and House Sparrow populations soon exploded. Now, they can be found almost anywhere in Canada, the United States, and Mexico. These birds are year-round residents, and their distribution is closely associated with human habitation. They are found in agricultural, suburban, and urban areas, and they tend to avoid woodlands, forests, grasslands, and deserts.

Diet
House Sparrows forage on the ground, eating a variety of seeds and grains, sometimes obtained from livestock feed or livestock droppings. They also eat insects, spiders, and fruits in the summer.

Pair Formation and Territoriality
House Sparrows are monogamous, and the long-term pair bond is maintained throughout and between breeding seasons. This species is highly social, breeding in small colonies or loose groups.

Once the male establishes a territory, he remains there throughout the year. When the breeding season begins, he aggressively defends a nest site and will not leave, even if his mate disappears. This extreme site fidelity creates intense competition between species for nest sites. Males that begin guarding territories early in the season often prevent later-arriving migratory species from nesting. Additionally, sparrows have been known to evict birds that attempt to nest in their territory. In displacing a nesting pair, male sparrows destroy eggs, kill nestlings, and sometimes even kill incubating females. For this reason, the presence of House Sparrows is believed to be a factor in the decline of many native species, such as Eastern Bluebirds and Tree Swallows.

Nest Building:  Although they often nest in tree branches or limbs, House Sparrows prefer to nest in natural tree cavities at the edges of forests. They will also nest in building crevices, and in nest boxes located in rural, suburban, and urban areas. Sparrows begin building their nests as early as February. The male selects the nest site and builds the nest, but the female may help. The nest is dome-shaped and has a side entrance. It is a messy collection of grass, weeds, paper, and string, lined with hair and feathers.

Egg Laying: The female lays four to six whitish to greenish white eggs. The eggs are smooth, slightly glossy, and blotched or spotted with gray, bluish gray, black, and brown marks. These marks are evenly distributed over the entire egg, often forming a wreath at the larger end.

Incubation: Both sexes incubate the eggs, beginning the day the penultimate, or next-to-last, egg is laid. Incubation lasts 10 to 13 days.

Nestling Care: After the eggs hatch, the female primarily broods the nestlings, although the male helps. Brooding time decreases as the young grow older. Both adults feed insects to the young and remove fecal sacs from the nest. Additional adults, or helpers, may aid the breeding pair in raising the young, but this is rare. The young fledge after 14 to 17 days, but they remain dependent on their parents for approximately 10 days.

House Sparrows can have up to four broods per breeding season, and pairs often reuse a nest site, both within a season and in subsequent seasons.

House Sparrows are not protected by the United States government.