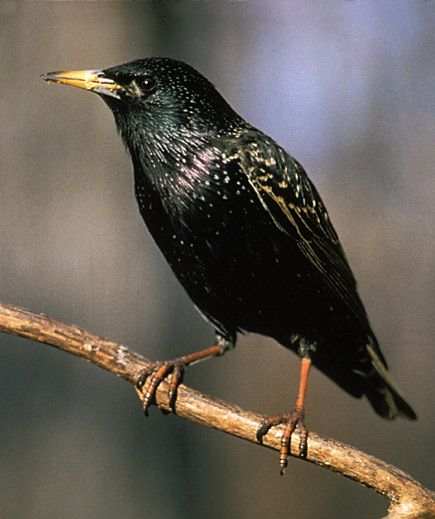 Male and female starlings look similar. Both are glossy black with purplish and greenish iridescence on the head, back, and breast. Males have yellow bills in spring. Juveniles have grayish brown plumage, and their bills are brownish in color.

Distribution and Breeding Habitat
The European Starling was introduced to North America in the late 1800s, when 100 birds were released in New York City. Today, only a century later, their North American population is believed to exceed 200 million. Starlings are widely distributed all across the United States and Canada, and they appear to be slowly expanding the northern and southern boundaries of their range. Like House Sparrows, European Starlings are habitat generalists, and their distribution is closely associated with human habitation. They nest in areas ranging from rural and agricultural to suburban and urban areas, but they avoid heavily wooded, mountainous, and arid regions. Starlings readily and aggressively displace nesting pairs of other species from their nests, often destroying eggs and killing nestlings. They often out-compete woodpeckers, Great Crested Flycatchers, Tree Swallows, Eastern Bluebirds, and Purple Martins for nesting sites. Consequently, the populations of these and other native cavity-nesting species have declined.

Diet
European Starlings are dietary generalists, eating a variety of invertebrates, such as snails, worms, millipedes, and spiders, in addition to fruits, berries, grains, and seeds. They forage in flocks year round; flock size depends upon the time of year and availability of food. In winter, they often forage in mixed-species flocks with cowbirds and blackbirds.

Pair Formation and Territoriality
Although European Starlings feed, roost, and migrate in flocks, they tend to be solitary nesters, only occasionally nesting near others. In February and March, males establish their territories and begin advertising for mates. Soon afterward, the females select their mates, but it is uncertain whether they are choosing the male or the nest site he is defending. Once mated, the male defends only the nest cavity, rather than a large area around it. This species is monogamous, but in some populations males are polygynous.

European Starlings usually build their nests between late February and early March. The male begins building a nest before he has a mate, but the majority of the nest is built by the female, after the starlings have paired. Females only build in the morning, and it usually takes two or three days to complete a nest. During this time, males closely guard their mates to prevent other males from copulating with them.

The cup of the nest is constructed of coarse grass, twigs, pine needles, rootlets, and straw and is lined with moss, feathers, wool, and fresh leaves. These leaves are replaced frequently and are believed to function as a natural insecticide or bactericide.

Egg Laying: Within a population of starlings, egg laying is synchronous; that is, most females begin to lay their eggs within three or four days of each other. The first eggs are laid around mid-March. Females lay one egg per day, and the average clutch contains four to seven eggs. The slightly glossy eggs are pale bluish- or greenish-white. Males continue to guard females during this period.

Incubation: Females begin to partially incubate the clutch after the first egg is laid. With each subsequent egg, females increase the amount of time they spend incubating. Full-time incubation begins the day the penultimate, or next-to-last, egg is laid. Both sexes share incubation duties.

Nestling Care: The eggs hatch after 12 to 15 days. Females and, to a lesser extent, males brood the nestlings for about a week. Nestlings are fed soft-bodied invertebrates immediately upon hatching, but as they grow older, they are fed a larger variety of foods. Both adults remove fecal sacs from the nest at first, but this behavior eventually ceases, and the nest quickly becomes soiled. Males mated to more than one female give little or no parental care to the brood that hatches last. The nestlings leave the nest when they are 21 to 23 days old, but they continue to be fed by their parents for a few days. After reaching independence, the fledglings form flocks with other juveniles.

Pairs reuse nest sites within the same season, as well as in subsequent seasons. If the first clutch is successful, most pairs do not raise another brood. If the first clutch fails because of predation or weather, the pair will attempt a replacement clutch. Double broods are more common in the southern portion of the starlings' range.

Winter Movement and Dispersal
In winter, starlings in the midwestern United States migrate, but starlings in the East tend to be residential. Young birds migrate farther than older birds. Migrating flocks can reach enormous numbers; flocks of 100,000 birds are not uncommon.

While juveniles do not return to their natal territories in the spring, adults return to the same breeding site every year.

The European Starling is not protected by the United States government.