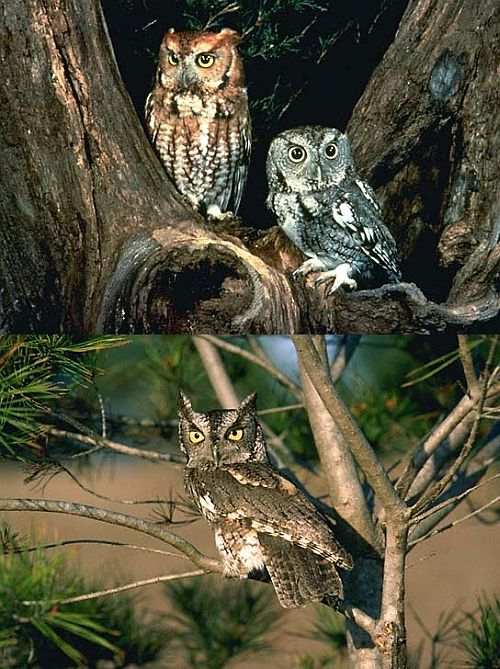 The Eastern and Western Screech-Owls closely resemble each other, and in the past, the two species were classified as one. They are the most diverse in plumage color of all the North American owls, and variation in color is related to region. The Eastern Screech-Owl has two color morphs, rufous and gray; rufous individuals live mainly in the south and gray individuals in the north. The breast and belly are heavily streaked and spotted with black.

The Western Screech-Owl has only one color morph, gray, but individuals found along the northwest coast can be brownish. As with its eastern counterpart, the belly and breast of the western species are marked with blackish streaks and bars.

In both species, males and females look alike. They are approximately eight inches tall, with yellow eyes. They have ear tufts, which are conspicuous when raised. The two species can be differentiated by bill color and vocalization: Eastern Screech-Owls have a pale bill and make a descending trill or whinny vocalization. Western Screech-Owls have a dark bill and make a series of hollow whistles on one pitch, running into a tremolo, with the rhythm of a small ball bouncing to a standstill.

Distribution and Breeding Habitat
Eastern Screech-Owls are found east of the Rocky Mountains to the Atlantic. The species ranges from the Canadian boreal forests south to Mexico. They live in all forest types and prefer woodlands that are interspersed with the open clearings, meadows, and fields necessary for hunting. They also inhabit wetlands, orchards, suburban parks and gardens, and towns.

Western Screech-Owls range all along the western coast of the continent from Canada south to the Baja peninsula and into Mexico, and they are found as far east as the western border of Texas. They usually live at lower elevations and prefer open oak and riparian woodlands and seasonally wet areas. They also inhabit streamside groves, deserts, suburban parks, and gardens.

Eastern and Western Screech-Owls both compete with other species for nest sites, and their cavities are often usurped by fox squirrels, European Starlings, and Northern Flickers.

Diet
Screech owls are highly nocturnal, and therefore are rarely seen hunting and feeding. How soon after dark individuals begin to hunt depends on weather and food abundance; males tend to begin hunting earlier than females. Their diet is the most varied of any North American owl species, and is region-specific. They feed on insects, crayfish, earthworms, and all classes of vertebrates, including songbirds, fish, amphibians, and small mammals such as squirrels, shrews, rabbits, bats, and rodents. The owls swoop down from their perch to capture their prey; they rarely hover while hunting. Screech-Owls cache uneaten prey items in cavities.

Pair Formation and Territoriality
Screech-Owls are poorly studied, so information on their pair formation, territoriality, and nesting behavior is limited.

Before the breeding season, males defend an area containing several cavities. As part of patrolling their territories, males spend each night in a different cavity. The breeding season begins earlier in the southern regions of the species’ range, and its onset is affected by numerous factors, including weather, food availability, and the age of breeding adults. Once breeding begins, males concentrate less on territorial defense and more on courting females. Males perform elaborate courtship displays involving hopping, bowing, bill snapping, and presenting food to females. Male Screech-owls tend to be monogamous, but some are polygynous, forming pair bonds with more than one female. The degree of polygyny in a population depends on food availability and population densities. Individuals of the same age form pair bonds, and bonds are lifelong. Individuals will, however, find a new mate to replace one that has disappeared.

Nest Building: Female Screech-Owls select a nest site from the cavities on the male’s territory. Females tend to choose cavities that have been well supplied with food by the male. They also prefer cavities in which they have successfully raised young in previous years.

Nests are typically found in natural cavities, abandoned woodpecker holes, and hollow stumps and limbs. The western species also nests in saguaro cactus cavities and abandoned magpie nests. Both species use nest boxes, and field studies show that boxes are selected as often as natural cavities for nest sites.
Screech-Owls do not build nests but form a depression in whatever remnant materials (fur and feather debris from eaten prey) are in the cavity. In regions where Blind Snakes (genus Leptotyphlops) occur, these owls have been known to provision their nests with live Blind Snakes. It is believed that the snakes eat ant and fly larvae and pupae and, thereby decrease insect competition for stored food.

Throughout the nesting cycle, females stay in their nest cavity all day but leave briefly at dusk and near dawn. They are sensitive to disturbances during egg laying, and if disturbed they readily abandon their nests.

Males may roost within the cavity with the female throughout the nesting period.

Incubation: The incubation period is 26 to 30 days for Eastern Screech-Owls and 21 to 30 days for Western Screech-Owls. Incubation usually begins the day the first egg is laid. Only the female incubates, but during the day the male roosts in the cavity with the female or near the cavity. Males feed their mates during this period. Screech-owls are not easily frightened off the nest, and parents may attack intruders and perform distraction displays. Many birds habituate to human disturbances and react more passively, flying out of the nest when a human approaches.

Nestling Care: Because incubation usually begins with the first egg, the eggs develop at different rates and therefore hatch asynchronously. Often two chicks hatch on the same day and the others on following days. Initially, the young are brooded by the female. After about 6 to 13 days, some young can thermoregulate, and the female stops brooding. At first, the male is responsible for providing food for the entire family. He delivers food to the female, who apportions it among the young. As the young get older, the female begins to hunt as well and gives food directly to the young.

If a nest is abandoned or preyed upon during the nesting cycle, the pair lays a replacement clutch. These clutches tend to contain fewer eggs. Both species raise one brood per breeding season.

Screech-Owls do not migrate; they maintain home ranges throughout the winter. During severe weather, owls may move off of their home range to search for food. These owls are primarily solitary except during the breeding season. Pairs occasionally roost together during the winter in hollow trees, nest boxes, and trees with dense foliage.

At the end of the breeding season, parents become territorial and force young off their natal territory. Little is known about the dispersal of young, but dispersal distances appear to be similar for males and females and are affected by weather, food availability, and population density.