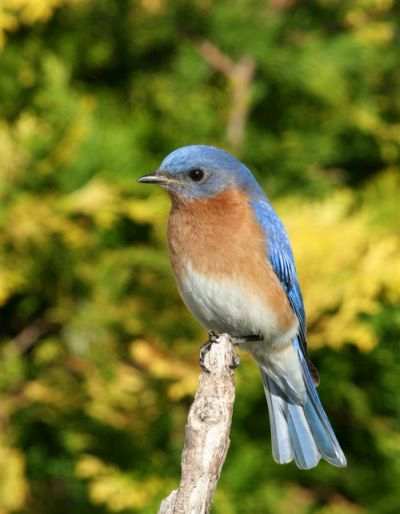 Description: 7" (17 cm). Bright blue above and on wings and tail; rusty throat and breast; white belly and undertail coverts. Female similar, but duller.

Range: Breeds east of Rockies from southeastern Canada to Gulf of Mexico; also in mountains of southeastern Arizona and southwestern New Mexico. Winters in southern part of breeding range. Also in Mexico.

Discussion: This beautiful bird is a favorite of many people and is eagerly awaited in the spring after a long winter. In places where bluebird nest boxes are erected and European Starlings and House Sparrows are controlled, up to six pairs of bluebirds will nest on as many acres. In the past 25 years bluebirds have become uncommon in the East for reasons not altogether clear. Competition for nest sites with European Starlings and House Sparrows is likely a critical factor. The erection of many artificial nest boxes in recent years seems to be helping to increase the population.

More about the Eastern Bluebird

There are three species of these colorful North American birds. Eastern and western bluebirds have a reddish brown breast, which contrasts with their predominately blue plumage. Their relative, the (male) mountain bluebird is entirely blue.

Eastern bluebirds are primarily found east of the Rockies, and range from Canada to Mexico and Honduras. They are much admired for their lovely coloring and for a distinctive song that many hear as "chur-lee, chur-lee." The eastern bluebird is the state bird of both New York and Missouri.

Western bluebirds are found west of the Rocky Mountains from Canada to Mexico. The mountain bluebird also inhabits much of western North America—often at elevations above 7,000 feet (2,133 meters).

Bluebirds eat small fruits and hunt insects, spiders, and other creatures from above. The birds perch, watch, and then swoop to the ground to pounce on their prey.

Pairs mate in spring and summer, when they construct small, bowl-shaped nests. Females lay four or five eggs and incubate them for about two weeks. Young remain in the nest, cared for by both parents, for an additional 15 to 20 days. Bluebirds often have two broods in a season. Sometimes, a young bluebird from the first brood will remain in the nest and assist its parents in caring for the second.

Bluebirds are considered fairly common, but their numbers have declined substantially during the last century. Populations have been given a boost by the birdhouse boxes that have become popular in many parks and backyards.