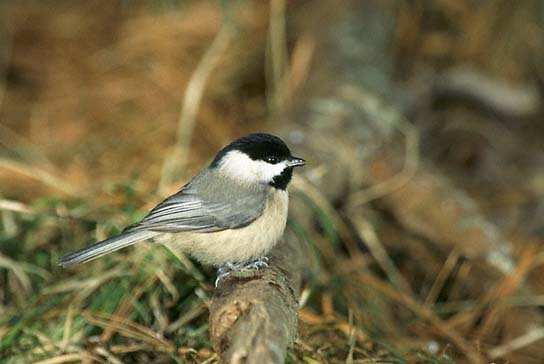 Voice: A buzzy chickadee-dee-dee-dee, higher pitched and faster than that of the Black-capped Chickadee; song has 4 whistled notes, see-dee, see-dee, with a downward inflection, rather than the 2- or 3-noted song of the Black-capped.
Discussion: So similar are the Carolina and Black-capped Chickadees that Audubon did not realize that they were different species until 1834 -- over a century after chickadees had been discovered by Europeans. The two species have much the same needs, and thus compete and cannot coexist during the breeding season; instead, they replace each other geographically. Like its northern relative, the Carolina Chickadee is a familiar visitor to feeders and a regular member of the mixed flocks of small birds that roam the winter woods.