Glittering Garments Of The Rainbow - Hummingbirds!

"Jewels of the Garden" and "Wonderful Works of Creation" are phrases writers have used to describe them. Spanish speaking people call them "Picaflores" (flower peckers) and in Portuguese they are "Beija Flor" (flower kissers). Their common names testify to their beauty and enchantment; names like Woodstar, Sapphire, Firecrown, and Sunangel. John James Audubon called them "Glittering Garments of the Rainbow". Hummingbirds are amazing creatures! 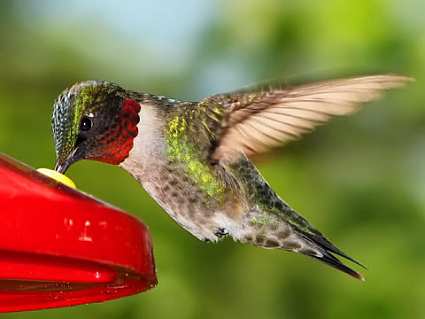 There are 319 species of hummingbirds in the world; all in the western hemisphere. Only 16 species are found north of Mexico. 15 of these breed in the western states. Only one species, the Ruby-throated Hummingbird breeds east of the Mississippi River.

When hummingbirds are the topic of discussion, people’s eyes light up, they smile, and ask a lot of questions. The following hummingbird facts will amaze you and may answer some of your questions.

The gorget (throat patch) of male hummingbirds is made up of iridescent feathers. These partially reflect light causing the brilliant reds, purples, greens, and blues seen on the birds. Hummingbirds claim a feeding territory and defend it vigorously. They attack other hummingbirds that cross their border and will attack much larger birds including crows.

Ruby-throated Hummingbirds migrate 500 miles nonstop across the Gulf of Mexico. Before starting they go into a feeding frenzy and will add 50% to their body weight. This extra fat will all be burned during the flight.

Hummingbirds in your backyard make for some very exciting and interesting birdwatching. There are 2 things you can do to attract hummingbirds to your yard; plant flowers and put up feeders. Good hummingbird flowers have red or orange trumpet shaped blossoms, but hummingbirds will feed at almost any brightly colored bloom that produces a good bit of nectar.

Good hummer flowers include; lantana, salvia, morning glory, and 4 O’clocks. A blooming mimosa tree is as good as it gets Hummingbird feeders work great! Put up several scattered about your yard. If you put up just one a dominant bird will claim it and run the others away. I put up a couple of feeders at the first of June, add 3 more in July and increase to 10 in August. By the first of September I usually have 50 to 100 birds in the yard.

Fill your feeders with a solution made from 4 parts water and 1 part sugar. Keep the feeder clean and change the solution if it gets cloudy. Soak the feeder in a mixture of vinegar and water to remove mold.

The Ruby-throats are the common summer hummer east of the Mississippi River. You may notice a seasonal fluctuation in their numbers, especially in the gulf coast states. The birds arrive from the tropics in March and usually come to feeders in fairly large numbers for a few weeks. As May approaches they all seem to disappear. They have not met with some terrible fate but have dispersed through out the eastern states to raise their families. If you are lucky a pair will choose your yard or neighborhood for a breeding territory. If this happens you will probably see birds at your feeders throughout the summer.

By mid August most of the birds from the northern states will be moving south and the feeding frenzy will begin. Our gardens will be swarming with "Glittering Garments of the Rainbow".

All the Ruby-throats will have left the country by the middle of October but don’t take your feeders down! The instinct to migrate is much stronger than the desire to stay with a reliable food source. The birds will not stick around and freeze to death. If you will leave a couple of feeders up all winter you may have a surprise! Western hummingbirds occasionally come into the eastern states. Most of these birds show up in the winter. Many of the western hummers live in the mountains and can tolerate more cold than the Ruby-throats.