About the Northern Cardinal 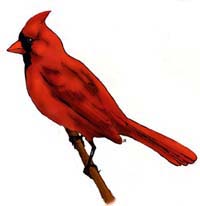 Cardinals belong to a group of birds called "grosbeaks", meaning that they have a thick bill especially adapted for cracking open and eating seeds.  Male cardinals, or redbirds as they are sometimes called, can be distinguished from other finches by their bright red color, a black patch around the bill and a red crest on the head. Females are olive-brown with red wings and a red crest.

Natural HistoryBesides their red plumage, cardinals are also known for their large repertoire of songs. Unlike most songbirds, cardinals sing all year long. In addition to their famous "cheer, cheer, cheer" song, they often throw in a "wheet, wheet, wheet", or "chew, chew, chew", or a "cheedle, cheedle, cheedle". Females sing too and will answer the song of a male. During courtship, a male is often seen feeding a female. He continues to feed her while she sits on the nest.

Cardinal nests are composed of dry leaves, twigs, grape vine and dry grass. The female normally builds the nest and chooses thickets, briars or young evergreens that offer protective cover from weather and predators. Cardinals also like to nest near streams, which supply drinking and bathing opportunities.

Nesting from March through August, cardinals lay two to five eggs at a time. The eggs can be gray, buff, or light green in color with spots of gray and brown. Females incubate the eggs for 12-13 days and the young leave the nest when they are about ten days old.

A pair of cardinals may have two to four broods during one season. The male tends to the newly fledged young while the female begins incubating the next clutch of eggs. Producing this large number of young each season helps the cardinal species survive.

One of the dangers cardinals face is becoming a parent to a cowbird. Cowbirds lay their eggs in other bird's nests and destroy the host's young in the process. The adopted parents then raise the cowbird as if it was their own.

How to Attract CardinalsYou can attract cardinals to your yard by providing food, water, and cover plants for nesting and resting. In the wild, cardinals eat a variety of foods including insects, fruits, and berries, weed seeds and farm crops. They also eat caterpillars, grasshoppers and beetles. At feeding stations, cardinals prefer black oil sunflower seeds, millet, cracked corn, peanut butter, nuts, fruit and mealworms.

Cardinals prefer brushy woodlands, streamside thickets, orchards, swamps, suburban gardens and parks. They like to roost and nest in dense thickets, evergreens and hedges. During breeding season, they are attracted to dense thickets of brambles, shrubbery and vines for nest building materials and placement.

Cardinals prefer to eat on a tray, a platform type feeder, or on the ground. Favorite seeds include sunflowers and safflowers, but they are known to eat over a hundred kinds of fruits and seeds in the wild. Attractive garden plants include brambles, sumac, cherry, dogwood, grape, mulberry, blueberry, elderberry, tulip tree, and hackberry.

Planting the trees and shrubs that are listed below will help create a yard that is more attractive to cardinals.

Cardinals and WindowsCardinals are highly territorial of an area they have chosen for nesting. Males vigorously defend their territory from other male cardinals and will even attack their own reflection in a window or car mirror. Even females will constantly attack windows, which can be quite distressing to people living inside the house. To help discourage this behavior, hang a sunscreen or towel to "break" the reflection of the bird in the particular window or mirror. The towel may look funny on the window, but it will save you from worrying about the birds harming themselves, and it will help the birds get on with the business of nesting and defending against real threats.