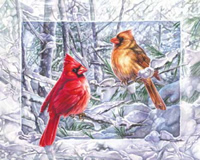 Warmth and Serenity in the Winter

Though they number in the millions there is nothing common about Cardinalis cardinalis. A male cardinal is bright red with black eyes and throat, sporting a definite red crest on the top of his head. He’ll grow to be about 8 1/2 inches tall. The female, as it is with most wild birds, is less colorful, choosing a less flashy brownish-red muted coat of feathers. In late summer, however, the male may molt and get his own version of “male pattern baldness” by losing every feather on his cap. Luckily for the bird he grows his nice head of feathers back within a few weeks.

Cardinals mate for life and never take separate vacations. It’s not unusual to spot husband and wife dining at the backyard feeder together. They enjoy such delicacies as spiders, fruits, berries, insects, wild seeds and most of the staples at the bird feeder. Their favorite seed is probably any type of sunflower. Although he may prefer to eat on the ground or low in the bushes, you won’t have to twist his wing for him to stop at the nearest hanging feeder with a platform for a quick snack of sunflower seed or peanut butter.

Nests are made from twigs, bark, roots and vines — basically anything they can get a beak around — and often found in dense hedges and thickets. Eggs are laid anytime between mid-spring and mid-summer. The female may lay several clutches consisting of two to five eggs each during one season. Cardinals do not migrate, preferring to stay put as long as it’s comfortable for them.

Here are a few comforts you as a human can provide to give them every reason for making their home in your backyard: