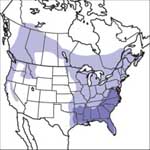 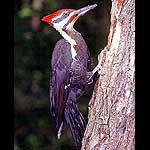 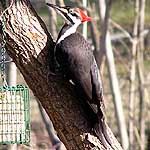 Identification:
Slightly smaller than the American Crow, this woodpecker is mainly brown-black and white. In flight, the upper wings are black with small white areas at the base of the base of the primary flight feathers. Perched birds appear mostly black above, with white on the side of the neck. The white line on each side of the neck drops below each wing to merge with the white wing lining. Each white line begins in front of the eye at the base of the bill, passes beneath the eye, notches up high over the cheek and ear region of the head, and extends down to the neck. The chin and upper throat are white and the head bears a large, rear-facing crest. Males have a red forehead, crown, and crest, while females have a gray to yellow-brown forehead. The dark bill is around two inches in length. Males have a white line above and behind each eye, merging with the red crest; in females, this white line is thinner. Females have a black moustache (malar) extending from the lower mandible to the dark breast; males are similar, but with red feathers in the moustache under the eye. The leading edge of the underwing is white; white wing coverts form a broad oval patch bordered by a broad black trailing edge and wing tip. Flies in a labored, undulating way.

Voice: Most often heard is a "cuk, cuk, cuk . . ." sound, not unlike the quieter calls of Northern Flicker, accelerating and becoming higher in pitch. Drumming is slow and deliberate.

Habitat
This species requires late successional stages of forest for habitat, as well as younger forests that have scattered, large, dead trees for food, nesting, and roosting. In younger forests they requires larger areas: 3,904 acres of virgin forest supports 3-6 pairs of Pileated Woodpeckers, while the same area of secondary forest will support just one pair. They also require larger trees with dead centers for roosting, where the bird excavates only the entrance hole.

Feeding
Most studies of diet describe it as being constituting more than half by animal matter, mainly Carpenter Ants. In addition, Thatching Ants, beetles, other insects, and vegetable matter make up around one quarter of the total. In one study, Pileated Woodpeckers spent 58% of their foraging time on dead wood and 36% on live wood. In another study, the birds fed on dead wood 96% of the time, 44% on snags, and 36% in dead logs.

Nesting
Both sexes excavate a cavity in tree 15 to 125 feet above the ground. The oval entrance is taller than wide, about 4-6 inches in diameter. The cavities measure between 10 and 24 inches deep, and the birds construct a new one each year. The clutch ranges in size from 1 to 6 eggs, with an average of 3.8 eggs per clutch. Parents share in raising young, and the young leave the nest about four weeks after hatching.

Migration
No evidence of migration, though some southern movement of northwest birds apparent in the fall.

Conservation Status
The removal of dead and living trees with large diameters has the largest effect on eliminating nesting, roosting and feeding sites. Forest fragmentation reduces population density and exposes birds to predation as they fly between patches. This species has also been the victim of extensive shooting and is currently protected. The USGS Breeding Bird Survey shows an average annual increase of 1.9% across North America between 1966 and 2003. Management should be focused on extending forest harvest rotations to maintain foraging and nesting habitat, and retain dead and dying trees in a range of habitats.

What you can do
If you manage forested systems within the range of the Pileated Woodpecker, seek guidance on managing your land to retain large blocks of 600-900 acres, retaining a canopy cover of more than 60% in at least half the area and leave three or more snags per acre, following research by The Nature Conservancy.