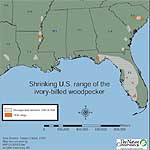 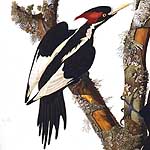 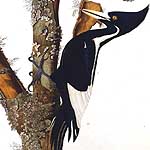 Identification:
Slightly larger than the American Crow and mostly glossy blue-black and white. In flight, a large white wing-patch on the trailing edge of the wing is formed by the white secondary feathers and white margins of the inner primary flight feathers. These white feathers form a broad white shield across the back when the bird is perched. Above the shield, "white suspenders" continue up the back as white stripes on each side of neck. The chin is black and the head bears a large crest--red in the male, black in the female. The broad, ivory-white bill is around two inches in length and has a broad chisel-shaped tip. The face of the female is all black with a white line beginning below and behind eye and extending to the side of the neck. Males are similar, but with red on the back of the crest from just behind the eye to the nape. The underwing has large white patches on the leading and trailing edges, with a black strip separating the white secondaries from the white wing coverts. In flight, this species resembles a long, slim duck and does not undulate, rising only as it lands on a tree trunk.

Voice: a single or double "tin-horn-toot". Deliberate "double-rap" from striking bill on tree.

Habitat
Requires extensive and continuous areas of forest that contain very large trees, and with a good supply of recently dead trees for food, nesting, and roosting. Softwood trees, that reach a large size more quickly and are easier to excavate, seem important. Prior to extensive logging and subsequent habitat deterioration this species is thought to have had a much broader range, in the forests of the southeastern and lower Mississippi valley states: from North Carolina to Florida and west to eastern Texas and Arkansas, with some reports from the 1800s in Kentucky, Missouri and Oklahoma. John James Audubon reported Ivory-billed Woodpecker as far north as the junction of the Ohio and Mississippi rivers around 1825.

Feeding
Most studies of diet describe it as being made up more than half by vegetable matter: seeds, nuts, and fruits being important (Southern Magnolia, hickory, Poison Ivy, grapes, persimmons, and hackberries). The animal component consists mainly of beetle larvae, especially those of the long-horn (Cerambycidae) and engraver (Scolytidae) beetles, obtained mainly by peeling the bark from dead trees, but occasionally also from fallen trees.

Nesting
This species constructs a cavity in trees 15 to 70 feet above the ground, creating an oval entrance taller than wide, about 4-6 inches in diameter and 18-25 inches deep. A new cavity is constructed each year. The clutch ranges in size from 1 to 6 eggs, with an average of 2.7 eggs per clutch. Parents share in raising young, with the young leave the nest about five weeks after hatching.

Migration
No evidence of migration, though nomadic movements following disasters that kill trees is likely.

Conservation Status
This species was uncommon but widespread across lowland primary forest of the southeastern United States until the mid 19th century. Loss of habitat by logging has squeezed the remaining birds into a small region. The discovery of one bird in 2004, sixty years after the last confirmed sighting in the Singer Tract in ne Louisiana indicates the need to conserve and manage habitat in this region, and to survey other regions from which unsubstantiated reports have come. The Big Woods, Arkansas, from which the new bird has been reported, is the second-largest contiguous area (543,632 acres) of bottomland forest in the Mississippi River basin. An additional 98,842 acres of adjacent or nearby land has been reforested in the last decade and is in early successional stages. Strategic additions to the public refuge system and successful restoration efforts by both public and private landowners are re-establishing mature hardwood forest, the crucial foraging habitat for ivory-billed woodpeckers. Increasing the extent and diversity of mature bottomland forest with large, old trees and substantial standing dead and dying is required.

Work with Audubon to support the National Wildlife Refuge System.