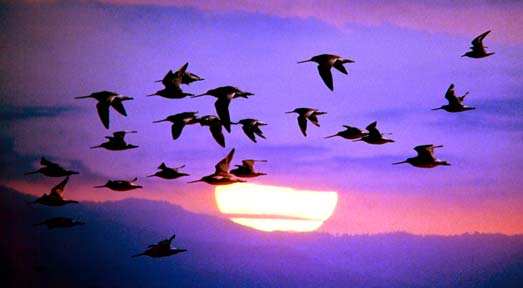 With regard to periodic seasonal movements, or migration, our birds can be classified as belonging to one of four groups:

Sometimes a bird species that's present in our neighborhood the whole year can also be migratory. The American Robin migrates, though in most of the U.S. it can be seen year round. If you live in Missouri, for instance, the robins you've seen all summer may, during fall migration, head south to Texas, while the robins you see during the winter may have nested in Canada.

In general, in the Northern Hemisphere, the farther north you go and the more severe the winters become, the greater is the percentage of birds migrating south to warmer climes during the northern winter. It's been estimated that of the 215 or so species of bird nesting in Michigan, about 90 percent migrate to some extent. More than 100 species who spend summer in the U.S. completely leave the country to winter in the West Indies and/or Latin America.

Birds do not migrate because they figure out that they need to. It's been shown that, at least in some birds, changes in day length cause glands in the birds' bodies to produce hormones that produce profound changes inside the birds, changes that prepare them for the flight south. In the fall, as days grow shorter, fat accumulates under the skin. This fat contains energy needed for those coming days when the birds will be spending more energy flying than they'll be eating during their occasional rests. Weather changes sometimes trigger a migration's start, but by then the birds are already prepared. If The urge to migrate must be very powerful. Starlings caged as their migration time approaches become extremely fidgety and point their bodies in the direction they want to fly toward.

Watching bird migration take place is one of the most exciting and interesting things a birder can do, and it's something you can see in your own backyard. Especially in the spring when birds are in their bright courtship plumage and males are lustily singing, it's a pure joy to walk around taking note of which species have arrived. In the fall, as Northern-Hemisphere migrants head back south, they're much quieter and their plumage is more drab. They're harder to identify, too. Nonetheless, their passage is still a majestic event to behold.

When migrants start moving, they form broad, diffuse waves that merge into great "rivers" of birds, and the four main North American "rivers," or "flyways," are shown above. The bird species in these great bird-rivers in the sky pass specific spots on the map at more or less predictable times. For instance, when spring's first Yellow Warblers, which winter from southern Mexico south to Peru and Brazil, return northward each year they reach southern California and southern Florida around April 1. By May 1, their "northern front" lies along a line running between Washington State and New York State. By June 1, they've reached the Arctic region of northern Canada.